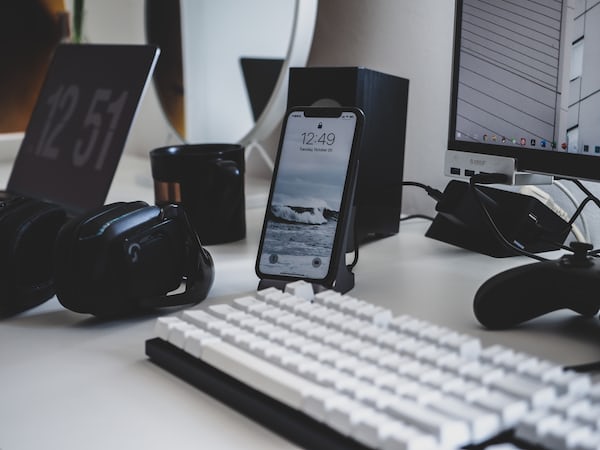 This allows the company to announce 18% more performance on the processor part compared to the Apple M1, for similar consumption (about 15 watts). There are still 8 cores, separated into two: four high performance cores (16 MB of shared cache) and four high efficiency cores (4 MB of shared cache). The overall power is listed at 3.6 teraflops per second.

Unified memory is LPDDR5 with 50% higher bandwidth: 100 GB/s. There was LPDDR4 on the Apple M1. Apple indicates a maximum capacity of 24 GB.

The Neural Engine has been revised, with 40% more performance and 16 cores, allowing it to process 15.8 trillion operations per second. The Media Engine has also been updated to be able to encode and decode multiple 8K streams in ProRes and HEVC while supporting 6K displays on output.

Apple took the opportunity to compare its Apple M2 to Intel’s chips (Core i7-1260P and 1255U). We find on the CPU part a better energy efficiency with 87% of the performance of the Intel chip for only 1/4 of the consumption of the latter. For the GPU part, it’s 2.3 times more performance for 1/5 of the power required.

Be careful, however, to take these figures with a grain of salt since we have no more information on the benchmarks used. But it seems that Apple is digging a little further ahead it has over Intel in the field of low-power chips.

We were waiting for it, here it is: the M2, Apple’s new major chip, represents a notable progress in the firm’s hardware. With this new generation Apple Silicon, the company hopes to hit hard. With 25% more transistors compared to the previous version, i.e. more than 20 billion, performance should be there: up to 100GB/s of shared memory, i.e. 50% more than the M1, with support 24GB of LPDDR5 memory.

Progress has also been made with regard to the efficiency and consumption of the beast. We are thus told the equivalent of 87% peak performance of a 12-core PC, for only 25% of the consumption. On the GPU side, two additional cores have been added compared to the previous version, to achieve a 10-core powered machine. Apple then presented various statistics, as usual, to praise the performance of the M2, as well as the features of the chip: