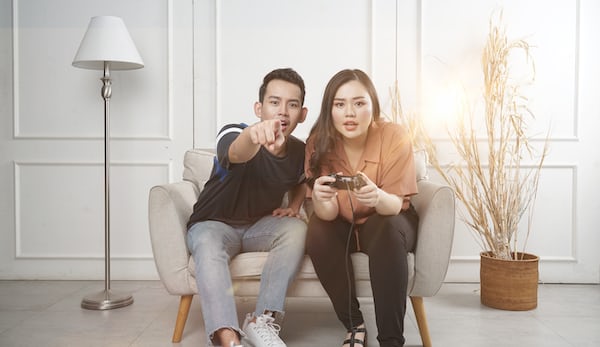 Teasing is the new leaking. In any case, it is very similar when we look at Fortnite season 7 and a possible Batman Court of Owls game. But there are also a lot of news, such as THQ buying Carmageddon.

Good morning! Today is December 4, the day before parcel evening, but more importantly: the day on which in 1961 Anton Geesink became the first non-Japanese person to win the judo world championship. And today in 1952, a combination of smoke and fog in the city killed 12,000 people in London. That was not that long ago at all! It also doesn’t seem to have helped that it was extremely cold, which made people heat their stoves even more. Bah. Due to the combination of smoke and fog, the word smog was born in that period and that is linguistically interesting. This is not a history lesson, time for game news.

The controversial game Carmageddon has been bought by THQ. At least, not the game itself of course (although it is recommended before you buy a license), but the license. It is of course thought that THQ wants to make another very tasteful game in that series, but no statements have been made by THQ itself. Do you like that, Carmageddon back again?

And Starbreeze Studios wants to make a new start

Overkill’s The Walking Dead sells so badly that studio Starbreeze has requested a kind of restart in Stockholm. CEO Bob Andersson will leave his post at the Swedish firm and the studio hopes that will get things back on track now that money is low. It all sounds honorable: the CEO is leaving so that the salaries of the employees can continue to be paid.

Bethesda comes with a new patch to fix Fallout 76

A new smaller patch is coming to fix Fallout 76. It is a download of 3GB on consoles and 36MB on the PC. Among other things, something is being done about the stability of the servers and that endless loading screen that you can get when you log out during the game. The patch will be released today with another patch on December 11 that mainly features CAMP improvements and additional settings for the PC. If you want to know what will be in the update tomorrow, read the patch notes from Bethesda:

So, will Fortnite season 7 go live on Thursday?

Epic Games teases it loose, because it seems that the new season of Fortnite will go live before The Game Awards. There is a Fortnite announcement at 6am Pacific during The Game Awards, which is 3am for us on the night from Thursday to Friday. We don’t know yet what that is. It has been tweeted by Epic’s Nick Chester that Fortnite’s announcement is not about Season 7 during the event. Still, something is definitely going to happen with Fortnite’s seventh season in two days, as this tweet was posted yesterday:

Well at The Game Awards: the new trailer for Rage 2

Now that we know what’s not going to happen at The Game Awards, let’s talk about what will happen: the showing of the trailer for Rage 2. What has become a bit controversial lately Bethesda hasn’t revealed much about game, but the game is still under construction. Hopefully this can be seen in the trailer on Thursday. And if a release date appears after the trailer, that would of course be great.

Your Guard will reveal the entire Game Awards: Ancestors is there too

One more piece of news about The Game Awards and then we move on to other crazy stuff. Studio Panache DigitalGames has revealed on Twitter that a new gameplay trailer of Ancestors: The Humankind Odyssey will be shown. This is followed by an extensive live stream about this third person open world survival game. By the way, it’s set in Africa 10 million years ago, so we’re going wayyyy back.

And the films with the greatest influence are …

Dorothy, hold on because The Wizard of Oz has been voted the most influential movie. This is followed by Star Wars: A New Hope and Psycho. Italian scientists have investigated how successful films are, if you consider their quality and their meaning and impact. According to the scientists, you shouldn’t look at what the ticket sales are like or what critics think about it, you should use an algorithm that looks at which films refer to each other. 47,000 films have been examined from IMDB and a kind of network is being made of all those films, as it were, to see if they are linked to other influential flicks. And then you see that King Kong (1933), Metropolis (1927) and, for example, Snow White and the Seven Dwarfs (1737) score extremely high. Knowing more? Check here for more information about the research.

Yes, it’s the week of the big tease, so maybe the game news remains a bit more foggy than you hoped Wacht. While everyone has their eyes on Rocksteady, WB Montreal is teasing a Batman: Court of Owls game. The studio is not attending the Game Awards this year to share more about it, but an Assistant Producer posted the Tweet below. Now it could be a Harry Potter owl, but it also looks a lot like the Court of Owls logo, don’t you think? Or is it the film game of the new Fabeltjeskrant?

Just Cause 4’s launch trailer is ON

A game called Just Cause 4 is out on PlayStation 4, Xbox One and PC and that means fierce explosions, gravity-challenging and hilarious situations await you. This is the launch trailer, be careful not to blow up your boxes.

Weird and a bit creepy facts about Mario in Didyouknowgaming

Did you think Mario just enthusiastically cheered on Yoshi for licking him? Forget it! Mario beats Yoshi for his resines! You will learn all about it in a painfully honest DidYouKnowGaming:

Well, your Wait is going to sleep soon, because it takes way too much effort to ignore Naughty Dog’s over-the-top Reveal Reactions video from when it announced The Last of Us Part II. Hihi, don’t forget that Saint is still in the country and have a nice day Today!