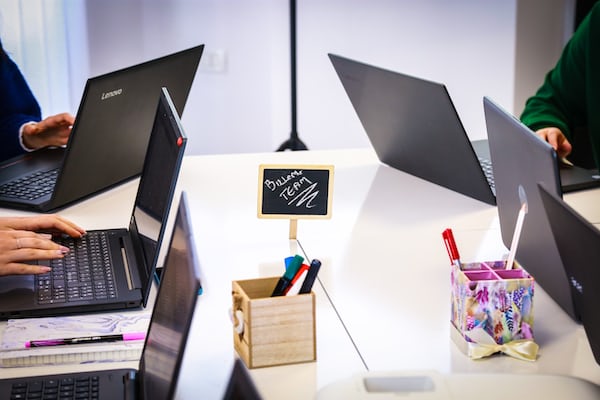 Goku and the company return in a more classic edition and a two-dimensional fight formula Dragon Ball FighterZ. We have to collect the jaw from the floor and admire the talent of the team once again Arc System Works, which has proven that she knows her profession like no one else.

First moments spent with Dragon Ball FighterZ it’s a real magic that shows that we are dealing with a work created by fans for the greatest fans of Dragon Balls. The game looks spectacular and in many ways dazzling. Beautiful special effects accompanying the attacks, powerful explosions and dynamic camera shots make us receive a show more spectacular than the original anime. Especially since the title is soaked with a lot of flavors for fans. In the game, we can reproduce the most iconic moments, and some of the animations were moved alive from the frames of the series. Other scenes look like a copy of the manga pages. You can see at every step that Arc System Works approached the legendary brand with great respect and revived it in the form of an amazingly successful fight.

The studio tried an interesting procedure and gave up the classic menu. Instead, we get to the lobby, where we walk freely and choose certain modes by going to the right place. This is a kind of unification of the network mode with offline gameplay. Fortunately, we have shortcuts in the form of a handy interface and with its help we can quickly select gameplay variants. There are some of these and you don’t have to worry about the lack of content. We have a simple tutorial explaining the basic mechanics, extensive Training, Arcade mode in the form of three different ladders with a set of different challenges, a local Versus mode and a Tournament for up to 16 participants. There was also a plot where we will get to know original events detached from manga and anime stories. It’s not anything particularly interesting, but it’s worth your time.

Story mode is the perfect place to start playing. It gradually introduces you to the combat mechanics and offers numerous tips. It is divided into three paths, each of which presents events from different perspectives and with a slightly different course. It will take two to four hours to complete one of them, so we’ll spend some time on it. Especially since this mode introduces simple RPG elements, including driving experience levels. The story itself focuses on the character of Android 21 and her army of clones, and we assume the role of a soul without a body. As an ethereal being, we connect with famous heroes and help them overcome the existing crisis. Warriors are aware of our presence and often address us directly. It is not anything ambitious and in many ways you can see the easy way to quickly put together something that is supposed to take time for Sunday players. Nevertheless, there will be plenty of funny scenes and references to anime events that work on nostalgia.

Let’s focus on the combat system, because it is the most important element of the game. The creators chose the task very neatly and despite the introduction of the auto-combo system, we are dealing with a really complex game. Novices can keep pressing one of the three buttons and the character will start to switch to a simple attack combination. However, do not think that you will lose anything with a more experienced player this way. Simple gameplay is only appearances, and genre veterans will quickly pay attention to the depths of the system or the very complex possibilities offered by combat. You must know that when using automatic combos, you deal much less damage and load the special attack bar slower. It’s also easy to punish your opponent for overusing this feature. The key to victory and a serious game will be the use of jump-cancels, dashes, assists and unique character skills as well as manual combos.

We are dealing with a situation very similar to the series Marvel vs. Capcom, with an emphasis on the second and third installments of the cycle. The game is terribly spectacular and showy, and thus – allows you to perform real miracles. Breakthrough combinations, where the best players quickly lock their opponent in a long loop and prevent him from moving under the flood of crazy offensive, will become commonplace at tournaments. Defense also plays an important role. However, we cannot interrupt the opponent’s bundle. If you get hit by an overwhelmed player, you can be sure that it will not let you free yourself for a long time. Unfortunately, I consider this a downside. I am afraid that there will be situations in the future where one hit will result in death and losing a round. We are left with defense, capturing enemy attacks, counter in the form of the Vanish teleport and a few other tricks.

The combat system, however, is a lot of fun and it’s hard to break away from it. Especially when we abandon auto-combo in favor of manual blows. Then, the smooth, effective and extremely fast gameplay motivates you to experiment. The fights are not only extremely fun to look at, but also a lot of fun. This is largely due to the interesting and diverse cast. The basic mechanics are similar to each character (with a few exceptions), but in general, players fight differently and you have to take into account their strengths, flaws and usefulness as an assistant. The relatively small number of characters may be disappointing, where at the start we have access to twenty-one warriors, and three more will be unlocked during the adventure. It also hurts the small number of arenas and the average music, which although suits the nature of the game, is not very impressive and is hard to remember.

Arc System Works so far, it has created niche fights, which even around the premiere did not shock the number of users in online lobbies. This time it’s different and the servers are full to the brim. Unfortunately, it seems to me that the demand has surpassed the skills of the creators and those responsible for the network infrastructure. Dragon Ball FighterZ despite several beta tests, it still suffers from problems with the matchmaking system. Matchmaking is cumbersome and often doesn’t work in private matches. The situation is the same in the case of arena fights, where a dozen or so players are standing and just waiting relentlessly long until they finally connect the individual players.

Fortunately, ranked battles are going on, but searching for them is taking longer than expected. I checked that the problem is not exclusive to me and it turns out that many players suffer from the inconvenience. Bandai is working to fix the issues, but we don’t know when they will be fixed. However, when it comes to fighting, the network code itself works very neatly. The delay issue resulting from playing over the network is often the limit of 2-3 animation frames. However, I have to complain about the culture of the players. The phenomenon of losing escapees occurs in every fight, but here it is extremely troublesome, because the game does not punish properly for such behavior. All in all, the game is fun in the end, but the infrastructure needs an immediate patch.

What is it ultimately Dragon Ball FighterZ? In many ways, delicious and can steal the hearts of both fans of serious fighting and those less experienced players who are anime lovers. However, it seems to me that it will be more suitable for the first group. The gameplay is front and extremely exciting fun in its purest form, where we quickly fall into the addictive syndrome of one more duel. All this gimmickness allows you to turn a blind eye to the exaggerated combat system that just allows too much at the expense of balance. However, such a structure of two-dimensional fights of this type and possible serious problems will not emerge in the wash until some time. Arc System Works did a great job and proved that, like no other, it can tame the nature of Dragon Ball, turning it into a devilishly exciting and eye-catching fight.

Interestingly, for incomprehensible reasons, the PlayStation 4 it is devoid of the Polish language. I do not find it an inconvenience that will lower the final grade, but it is worth mentioning. After all, it’s not a perfect position, but the enjoyment of playing outshines almost all the inconvenience. The title is perfect for long, hours long sessions with training freaks and as a typical party game for short clashes with friends. Overall, this is one of the best games ever Dragon Ball, and certainly with the most polished and thoughtful fight based on this brand. It is impossible not to recommend this game to fans of the genre or anime.

The game was provided for review by the Polish distributor – Cenega.