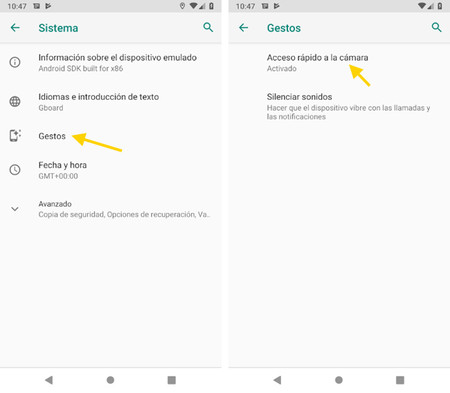 Android has been with us for over a decade, so it’s easy to think that everything was invented and that there is nothing left to know. However, a decade goes a long way, and some new features and functionality are sometimes almost forgotten. Here we collect 13 Android tips to know.

Depending on how long you use Android, they will ring more or less, but there are surely some that you do not know or that you forgot. We count more than anything on pure Android, although most of them are also available in the customization layers.

Return to the previous application

This is one of the simplest and most practical tips. The alternative to Windows Alt + Tab is double tap the recent button, which switches between the last two apps you use.

In pure Android, this is the default configuration, which you can check by going to System – Gestures – Quick access to the camera. This shortcut is quite common between customization layers, although you can sometimes change the number of presses or the button.

Use the volume button as a trigger 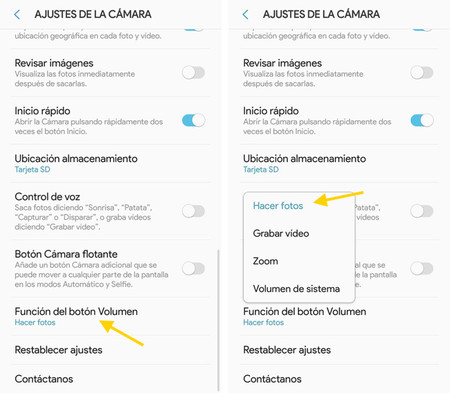 Similar to the previous tip, on most Android phones it is possible use the volume buttons as a trigger. In fact, this is how the stick selfies work which are connected by the minijack.

In pure Android, the operation is that of the factory, although in other layers, you may have to camera settings and verify that the volume buttons are used to take photos. On Samsung mobiles, for example, it can also be used to zoom or record a video, as shown in the previous screenshot.

Quick settings without going through notifications

This tip has been with us for many years, but those who have recently joined Android could have ignored it, because at no point does the system warn you that it is possible. If instead of lower the notification shutter with one finger, do it with two, the quick parameters are displayed directly.

In other words, if you are looking to activate the flashlight and you do not have its quick setting among those that appear above the notifications, swipe with two fingers from the top of the screen to open quick settings in a single gesture. 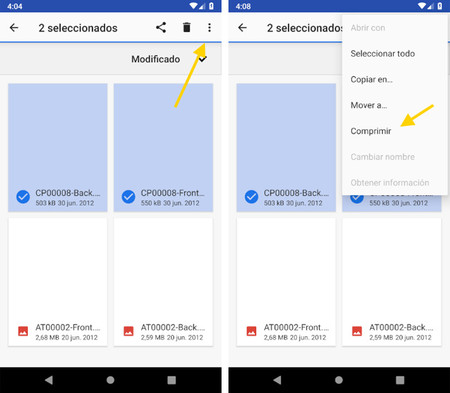 It is relatively unknown that Android has native support for managing ZIP files, both for opening and creating them. To create a ZIP file, you must open the Files application, select the files you want to add to the ZIP and choose Compress On the menu.

If what you want is unzip a ZIP, from the Files app, you can do this by simply tapping on it. The content is displayed, although you cannot open the files until you have unzipped them. To do this, select them and use the Extract to … menu

Zoom on any screen 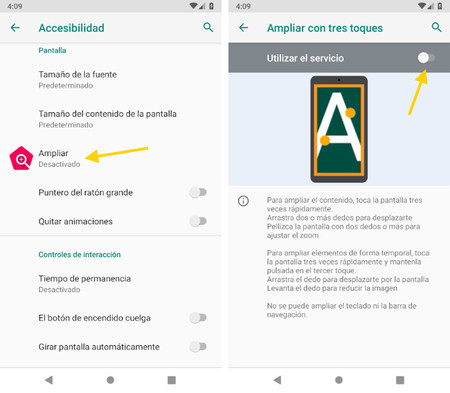 It has also been with us for several years, although it has improved in recent versions: the zoom on any screen. It’s about an accessibility option which you must activate in the Accessibility section of the parameters, in the section Enlarge. 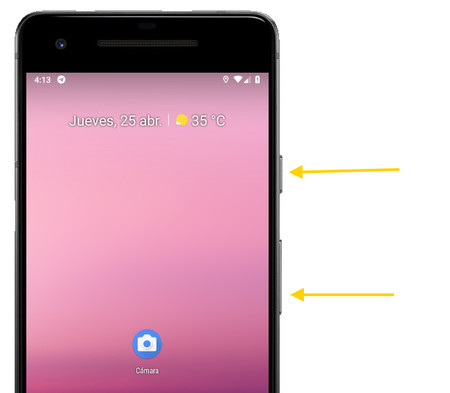 In the past, when a mobile phone was unresponsive, you would remove the battery and goodbye, but nowadays, mobile phones with removable batteries are mythological creatures. However, you can still stop or restart the hard way, although in a different way. 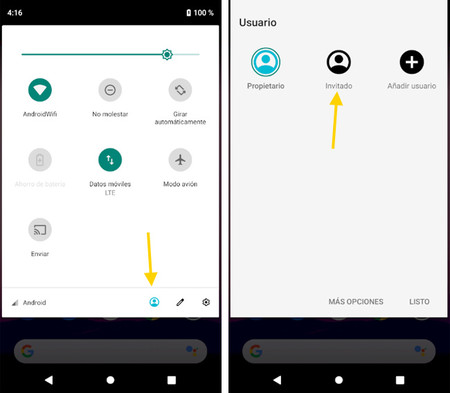 Does anyone need your mobile for a few minutes? If you are concerned about gossiping about what you have there, deleting your files or installing anything, an alternative is use guest profile. It’s something like the incognito mode applied to mobile users.

The quickest way to activate it is by pressing the user icon in the notification panel, then choose Guest. Guest mode appears with the system “empty” and without access to other users’ applications, accounts or files. 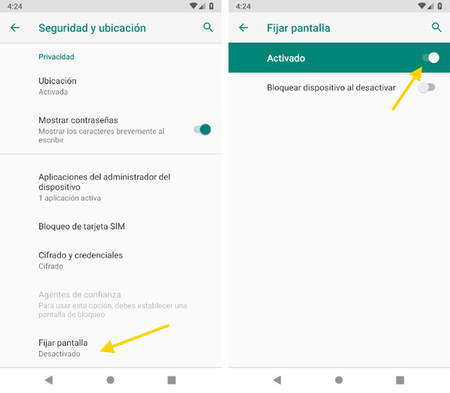 Screen pinning is a different solution to the same problem: preventing someone to whom you lend your cellphone from seeing more of the account. The name of the function was never very lucky, as it might have been better to call it the Fix application, because what it does is prevent you from switching apps.

To use it you must activate it first from Android settings, section Security and location, Pin screen. It is recommended to also activate Lock device on disable, because the fixed application can be easily deactivated, then in this way it is necessary to enter the password before you can use the system. 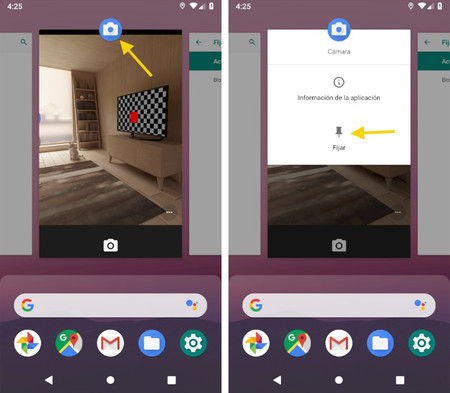 After activating the function, it is time to correct an application. It is done from recent sight, where you need to long press the icon of an application to display the Fix option. To remove the lock, press the back button and Recents simultaneously. 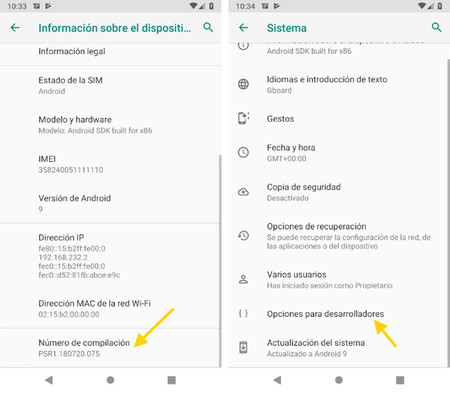 It’s a classic, though it can’t be missing in any collection of Android stuff for the simple fact of being a semi-hidden menu. Before using it, you need to activate it, by going to Android settings, System section, device information and press the build number eight times.

A notification tells you that the development options have been activated, but where are they? Return to the System section, display the advanced settings and they will be there. Then we’ll see another tip that requires you to have developer options turned on, just like when we told you how to put your mobile in black and white.

Increase the speed of animations 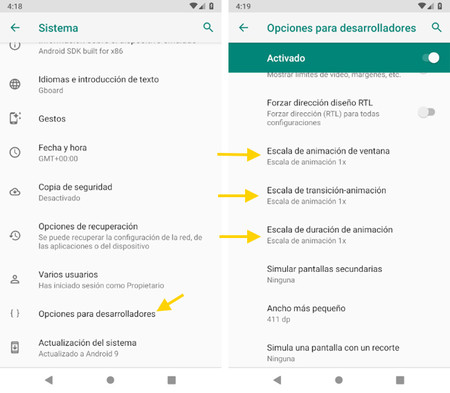 A trick that has literally been between us for years and has been used a lot in the past because the processors were fairly fair turn off Android animations or increase your speed. The parameter is in the Developer options that we mentioned in the previous point.

They are specifically three settings: Window animation scale, animation transition scale and animation duration scale. 1x is normal speed, while 0.5x is twice as fast, 2x twice as slow, etc. If you prefer, you can also turn them off completely. 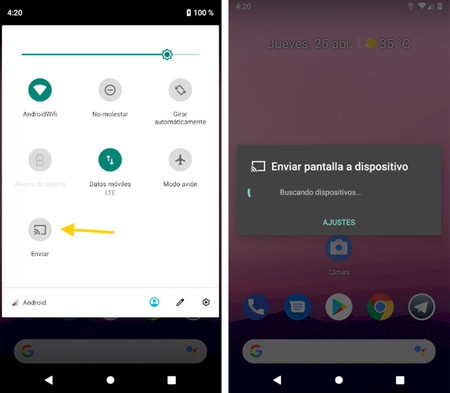 Android standardly supports wireless screen transmission to different devices such as Chromecast, Google Home or TVs with Miracast support. To activate it, simply display the quick settings, press To send and after choose your device from the list.

In most cases, you will not need to do more, although when connecting to TVs, you may need to check the connection with the remote control. If you project your mobile on TV, don’t forget to landscape to better use the surface. 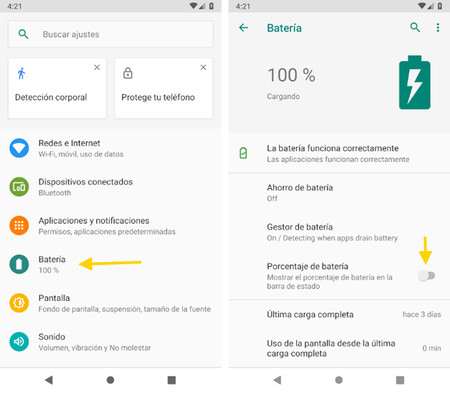 There are those who have enough to see the battery icon and there are those who need to know the exact number to avoid losing their mind. The latter can activate the Battery percentage from Android settings, in the section Drums.

When you activate it, you have the best of both worlds, because the icon stays and the percentage is added to its right. In exchange, yes, you lose a little space in the status bar, which can be a problem if you go there simply because your mobile has a thick notch.

Gboard is the default keyboard for Android, and includes lots of not-too-known tricks and gestures. For example, you can slide on the scroll bar to move the cursor, or do the same on the Delete button to delete a block of text more quickly.

OnePlus Nord against its competitors: it faces the Poco F2, Realme X50, Xiaomi Mi 10 Lite and other Android devices of the same price

More security for your Android: Access Dots alerts you if an app is using the microphone or camera

This is One Jotter, one of the best alternatives to Google Keep for Android

Vivo Y1s: a very cheap line with Android 10 to fight for the price

How to personalize your Android with a minimalist style: wallpapers and icons to do it

The latest version of Android: a virus can burn your mobile, literally

Call of Duty: Warzone – Tips and Explanations on the Verdansk Map

Call of Duty: Warzone Tips – Explanation of the best weapons, contracts and gulag

The best wallpapers for your Android mobile

Detailed guide to cooling a laptop: tips and steps to keep it warm

Xiaomi Mi TV Stick, an Android TV player the size of a Chromecast

How to activate Google Play Pass on your mobile, the Netflix of Android applications

How to change the voice with Voicemod for Android: create your video or audio clips