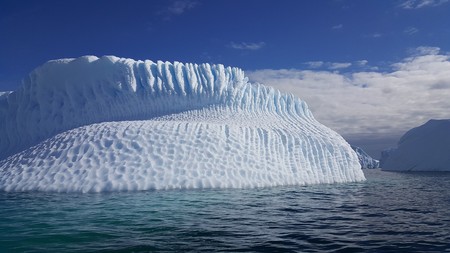 The South Pole has one of the most inhospitable climates on Earth and is one of the most distant places of human activity. Due to factors like these, it was thought to be not as affected by global warming as other parts of the world. However, new research shows the opposite is true: Antarctica sees average temperatures rise up to three times faster than the rest of the world.

The study published in Nature shows how the temperatures in this region of the planet have increased in recent decades. More specifically, they point out that they have increased on average at 0.6 ° C per decade, while in the rest of the world the average is around 0.2 ° C every ten years.

Average temperatures at the South Pole range from -60 ° C in winter (southern winter) to -20 ° C in summer (although quite surprising exceptions such as the 20 degrees Celsius recorded this year sometimes occur). The huge mass of Antarctica has changed these average temperatures over the years. But it’s not the same, While the western part has warmed, the eastern part has maintained and even reduced temperatures. This is due to the shape of Antarctica and its transantarctic mountains, which act as a wall to separate the continent in two.

The Amundsen-Scott scientific base has the most southerly observatory on Earth and has been collecting data on the meteorology of the place since 1957. As observed in the data collected, from 1989 to 2018 on average the figures increased by 1.8 ° C. Researchers suspect that the flow of warm air from outside and towards the interior plateau of Antarctica was the main cause.

These are the 50 best games of the decade, according to Metacritic – and Nintendo is three times in the top five

Another relationship they discovered is between the Temperatures of the western tropical Pacific and the South Pole. They noted that many of the warmest years on the Antarctic continent occurred when the Pacific also had strangely high temperatures.

Although the shape of the continent and the conditions of the Pacific have influenced, that does not mean that humans have nothing to do with it, according to the researchers. They analyzed a total of 200 simulations of climate models in which they included greenhouse gases from 1989 to 2018. Result? They estimate that of these additional 1.8 ° C average temperature, 1 ° C is a consequence of human activity.

IPad Air 2 will celebrate 6 years of record support in October, tripling that of other competing tablets

About the Spanish drug which is said to have “an antiviral activity 2800 times greater than remdesivir”: what we know about plitidepsin

We first saw the heart of a gas giant: we have just discovered the intact heart of a planet 730 light years away from us

We have mapped the earth, but we have left the oceans: this project wants to achieve it before 2030 and it already has 20%

Fujifilm prepares 400 terabyte cartridges, with up to 28 times more data density than today

New iPhone functionality reveals how many apps are spying on the clipboard for no apparent reason.

Flashback: Call of Cthulhu: the dark corners of the Earth

How does Beyond a Steel Sky fit in modern times?

“Traveling as we knew, it’s over”: Airbnb CEO says that in a matter of weeks, they have lost almost everything they have accomplished in years

Phil Spencer assures in Gamelab that the transition to the next generation will not focus so much on graphics, but on loading times and more

Crash Bandicoot: from his birth as “Sonic’s donkey” to a resurrection that took 20 years to arrive

These are the 50 best games of the decade, according to Metacritic – and Nintendo is three times in the top five

Discover Greenfield, the metropolis on a 1: 1 scale built on Minecraft in 9 years – article

Apple announces that its Macs will use Apple’s ARM processors: goodbye to Intel and the x86 architecture of the past 15 years

Black Lives Matter: The gaming industry supports the protests. But the other times? – editorial

Forget AirPods and get this revolutionary alternative for 4 times less

20 years later, I want to reprogram: what are the big changes and where to start

This is the most complete radiographic map of the universe ever made: 165 GB of data and a photo that took 182 days

Dujiangyan: the engineers who, more than 2000 years ago, decided to tame the Min river and, unwittingly, ended up forging China