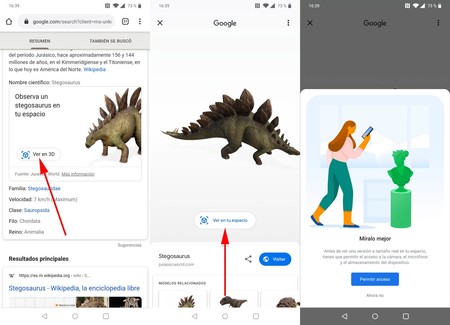 Google has renewed its catalog of animals and objects in 3D, playful representations in augmented reality that can be viewed from the search, addition of ten dinosaurs straight out of Jurassic Park. And they are already available: just enter the name in Google search.

Augmented reality is not only fun, it is also extremely practical for teaching virtual objects as they can be seen in physical space using the smartphone. Even animals, whether present or extinct millions of years ago: Google has just revived ten dinosaurs by including their representation in AR via search. Want to see what a Tyrannosaurus Rex or Velociraptor looks like? Prepare your mobile, it’s super simple.

This is how I make a living with a 3D printer

To see the dinosaur in 3D, you must first search it on Google from your mobile

The novelty was announced by Google itself on its blog: thanks to an agreement with Amblin and Universal Studios, producers of Jurassic Park, and with the development of Ludia, the 3D aspect of ten popular dinosaurs was modeled so that everything the world can see them on your phone. As on-screen animation and also using the camera to bring the dinosaur almost to reality.

The RA view of Jurassic Park dinosaurs follows the same mechanics as the animals and 3D objects we had previously seen: you need to find a specific name for Google to offer the 3D view of the above. After pressing the button, the dinosaur will be animated on the phone screen on a white background; and if you press’See in your space“The mobile will charge the augmented reality view once the representation surface is correctly detected (the phone’s camera must be pointed at the ground).

How to enable "Share with Nearby", the new Google system for sending files to Android

There are ten dinosaurs introduced in Google search: you must write one of them for the search engine to return the option to see it in 3D; with a visual browser that lets you jump to one of the other dinosaurs. Those included are: 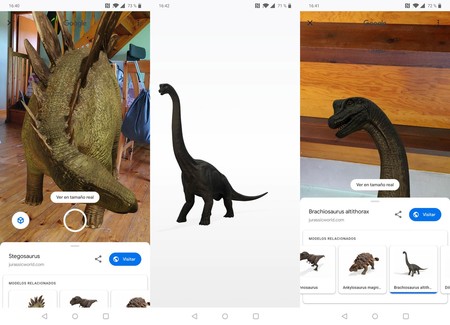 Dinosaurs can already be seen in Spanish research, but the augmented reality view may not yet appear. It’s a matter of time: if you can’t see it, just wait for Google to widen its view.

iOS 14 will require user authorization to track apps, which will lead to complaints from Google, Facebook and other companies

Ok Google: the 105 best commands to use with your mobile voice assistant

If you found the Unreal Engine 5 demo impressive, hang on to the bucks: the GPU barely tried, there is room for more

9 functions to use Google Drive for

Doom Eternal on Google Stadia looks great – but the lag is just too high!

PlayStation Now vs Google Stadia – What streaming are you enjoying during the holidays?

PlayStation Now vs. Google Stadia – What Streaming Treat Yourself During the Holidays?

Google Stadia is not supposed to work like this

Gylt and Kine – A Look at Google Stadias Indies

Living on five billion euros: Europe’s largest gold mine is in Asturias and it’s a nightmare for its neighbors

Google and its technology: employees ask to stop selling it to the police

How to organize a meeting with several people without going crazy using Doodle, Strawpoll, Google Calendar or Telegram

Spain will start in La Gomera the pilot phase of its contact tracking application, it will use the API of Apple and Google

All the secret places in Apple Park we saw at WWDC20

Google Stadia – Release, Games, Price, Specs and Everything We Know