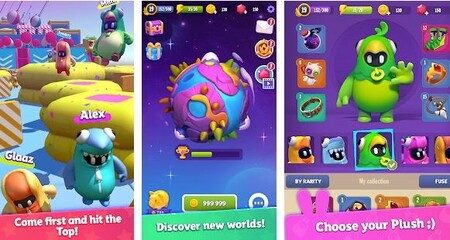 One of the hits of the summer was ‘Fall Guys’, a fun game that became popular among YouTubers and other content creators and that, after its launch on PC and PlayStation, caused a barrage of copies on the Play Store. Most of these games were of very low quality, just trying to take advantage of the game’s pull to win in downloads.

However, there is a proposal very similar to ‘Fall Guys’ sowing success on Google Play. It’s called ‘Run Guys’, accumulates more than 100,000 downloads, it has a score of 4.3 out of 5 stars and, most importantly for many: it is a free app (although with in-app payments).

‘Run Guys’ is clearly inspired by ‘Fall Guys’. We control our character and we compete against other rivals to be the first to reach the finish line. There are a lot of obstacles, which are getting more and more difficult as we advance in the different batches.

The ‘Run Guys’ controls are fairly straightforward, since We just have to control the movement with one joystick and the jumps with another. We have tested a few levels and both the graphics (simple, but careful) and the gameplay are very good. ** It is the most similar game to ‘Fall Guys’ that we can enjoy on Android, and it has deserved to stay installed on the server mobile.

‘Run Guys’ is not an online game, we play against other rivals, but everything outside the erd

The character can be customized, although some of the improvements are only available with coins, gems and more, which we get with micropayments. However, you do not need to pay to enjoy the game. An important note is that it is not an online game, but an asynchronous PvP. This means that we face real players, but not in real time, something similar to the offline experience of proposals like ‘Mario Kart Tour’.