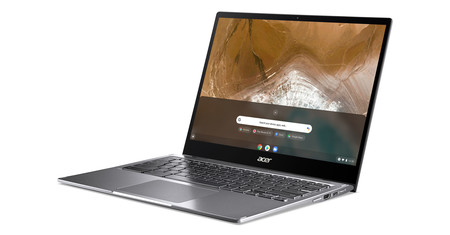 In the United States, it enjoys great popularity, the Chromebook market remains untapped in Europe. This does not mean that Google, on the one hand, and the various manufacturers, on the other hand, are continuing their efforts to strengthen it. In fact, Google has promised to provide eight years of updates to computers with Chrome OS and has made a deal with Parallels to bring them Microsoft Office and other Windows applications.

On the manufacturer side, one of those with a large catalog of such devices is Acer, which announced the Chromebook 712 at the start of the year and is now back in the fray with the Chromebook Spin 713, a premium 2K convertible based on the Intel Athena and Acer Chromebook Spin 311 project, a laptop with up to 15.6 hours of battery life.

This touchscreen offers a resolution of 2256 x 1504 pixels, IPS technology and Corning Gorilla Glass, just like the touchpad. It also has a battery with a quick charge of the device which offers up to 10 hours of autonomy and it integrates up to 16 GB of DDR4 SDRAM memory and up to 256 GB of PCIe NVMe SSD storage.

Its new reinforced and streamlined aluminum chassis provides military grade durability (compliant with US MIL-STD 810G 5), which makes it capable of withstanding impact, scratches and corrosion. Thanks to its convertible design, it can be opened up to 360 degrees, making its touch screen it can be used in four different ways: display mode to present, tablet mode to take notes or draw, portable mode with keyboard input and tent mode to make the most of small spaces.

At just 16.8mm thick and 1.37kg, it has a backlit keyboard and extensive connectivity: two USB 3.1 Type-C ports, one HDMI port, USB 3.0, MicroSD card reader, WiFi 6 dual band (802.11ax) with 2×2 MU-MIMO technology and Bluetooth 5.0. To all of this, the Acer Chromebook Enterprise Spin 713 adds the latest included Chrome Enterprise update, a solution that helps businesses manage devices on a large scale. 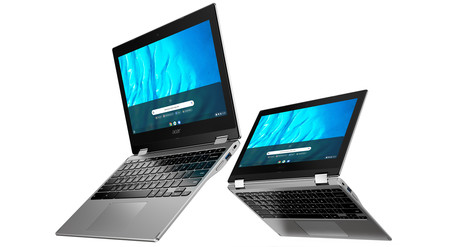 Weighing only 1 kg, it promises autonomy of up to 15 hours and has an IPS touch screen with HD resolution and Corning Gorilla Antimicrobial Glass. It also includes an improved keyboard with concave keys and sufficient movement between them, a webcam with a wide field of vision, Wi-Fi 802.11ac 2×2 MU-MIMO and Bluetooth 4.2 connectivity.

What and how do Apple promotions for students work?

iOS 14 “sneaks” as TikTok, Chrome, AliExpress and many other apps paste the contents of the clipboard

Google Chrome 84 stable already available on Google Play: this is the news

Chrome now tells you what ads are on each website, what information they collect, and which companies are sending them to

iOS 14 will require user authorization to track apps, which will lead to complaints from Google, Facebook and other companies

Acer Swift 5 (2020): the 1 kilogram ultrabook comes with an antimicrobial glass

Black Lives Matter: EA, Ubisoft, Square Enix and many other companies donate to the movement

Acer Predator Orion 9000: an imposing gaming computer with up to two RTX 2080 Ti and a liquid cooling system

Acer Predator X25 and XB3 – Five game monitors that stand out with a refresh rate of up to 360 Hz and a response of 0.5 ms

iOS 14 reveals a very bad practice of TikTok, Chrome, AliExpress and many other applications

Peloton, Netflix, BenevolentAI … This is how the technology companies that facilitate life and work at a distance have exploited

Huawei MatePad: a cheaper edition of its 10.4-inch tablet designed for students

This is how the #BlackLivesMatter protests have had an impact on networks: when tech companies stop looking elsewhere

Upload, review: a surprising comic series that poses a beyond managed by technology companies

Despite the COVID-19 crisis, the S & P500 index increases: the weight of technology companies increases

We have already arrived at telework from Spain for foreign companies

Upcoming layoffs: how companies use GPS, WhatsApp, email, or cameras to justify your layoff