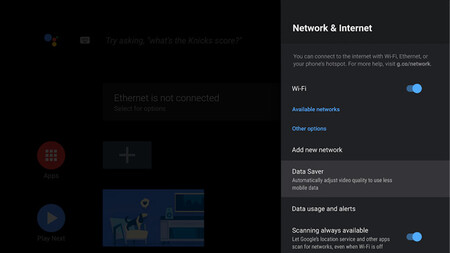 Google has announced a series of improvements focused on control Android TV data usage when used without Wi-Fi, that is, connected to a hotspot or using a data connection. These developments come in the form of a new application published on Google Play, Android TV Data Saver.

Android TV Data Saver includes in its first version three options: a wizard to make it easier to configure a TV with Android TV using a Wi-Fi access point, a data saving mode that reduces video quality and notifications when a certain amount of data has been exceeded.

These developments begin for the moment in India, the country where, according to Google on its blog, Android TV TVs are rapidly gaining popularity […] but not everyone has Wi-Fi at home. “A Wi-Fi access point can then be used, but Android TV does not distinguish between metered and non-metered Wi-Fi connections. That is, data consumption can be excessive and quickly kill the data plan.

To prevent this from happening, Google has released a series of new features on Android TV in the form of a new application, Android TV Data Saver. The app is integrated into Android TV, allowing activate data saving mode easily. With this mode on, the video quality is reduced to reduce data usage.

In addition, when activated, the data that has been used is counted and it can be configured to show a notification when exceeding a certain amount of data, such as 100MB, 500MB, or 1GB. The third related novelty is a guide to help you connect an Android TV to an access point created on a mobile.

Google has announced that these news will begin to be activated to Android TV users in India in the coming weeks, starting with Xiaomi, TCL and MarQ devices, with a global deployment later.