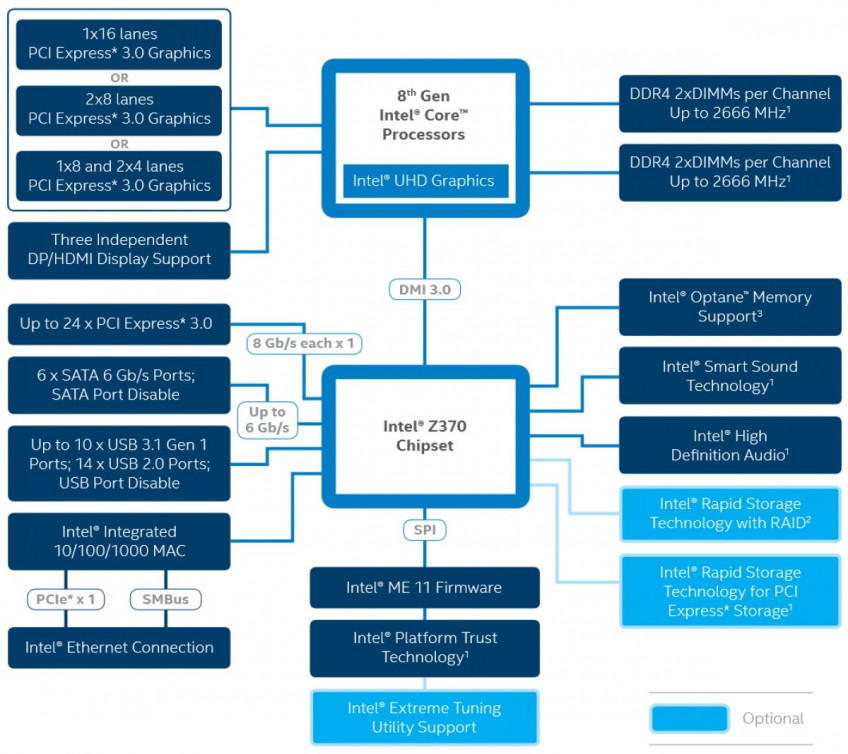 We’ll tell you how the budget B550 differs from the high-end X570 and whether it’s worth buying instead of the older B450.

For Zen 2, the long awaited boards of the B550 have started to appear. Why long awaited? Because for almost a year for Ryzen 3000, there were only older X570 chipsets and older 300 and 400 series motherboards, which did not work with integrated PCIe 4.0 processors. I won’t say it was a direct issue, but PCIe 4.0 is now also available in the mid-price segment. And now we are going to determine if it is worth paying for it.

For starters, what many may have missed: AMD chipsets on AM4 are different from Intel and what was on AM3. In the classic version, all external devices – disks, USB, network controllers – are controlled by a chipset, a small controller at the bottom of the board, also called a south bridge.

Intel in the face of competition that overwhelms it: AMD, Nvidia + ARM, the failure in mobiles, and now Apple abandoning the ship

Note: in the classic version, all the peripherals are located on the south bridge and are connected to the processor by a DMI 3.0 bus with four PCIe 3.0 lanes

It has its own set of PCIe lanes on which it communicates with different ports. Depending on the chipset, there may be six lines, like the younger H310 and A320, and sixteen, like the X570. And even 24, like the Z390. The problem is that AMD and Intel have a chipset associated with the processor of everything four PCIe lanes. And if suddenly all the devices want to share data with the “stone”, then the situation will be like on our roads: twenty lanes of one route will remain in four on another, and everything will stop.

On AM4 and Ryzen, this issue has been partially resolved: processors now have their own controllers for USB and drives with direct access to cores. Typically, we’re talking about four additional PCIe lanes. In Ryzen 1000 and 2000 it was PCIe 3.0 with a speed of 0.97 Gb / s, in Ryzen 3000 – PCIe 4.0 with almost 2 Gb / s. 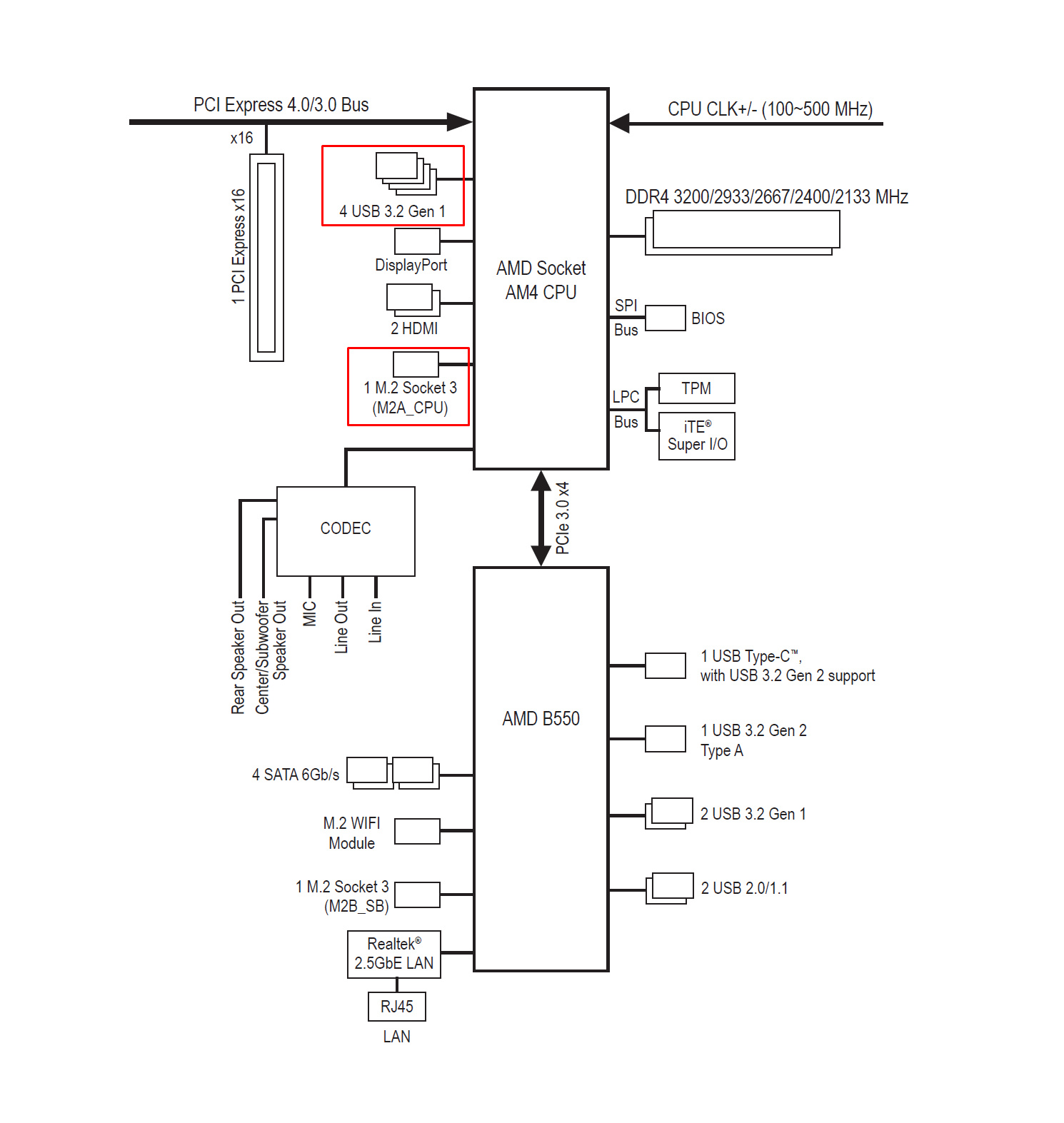 How these lines are assigned depends on the specific motherboard. But, as a rule, they are launched either on SATA connectors or brought to the M.2 port to ensure the operation of fast drives. Before Zen 2, their speed was limited to 2.5 Gb / s, with the arrival of the fourth PCIe, it increased to 5.5 Gb / s. For almost a year, such speeds were only possible on the X570, and now on the B550.

There are few differences between the B550 and the X570. In terms of processor connectors, the 550th chipset is more interesting: it allows two M.2s to be connected at a time using the x2 + x2 scheme, and in a RAID array. Let me remind you that the X570 only worked with a single x4 full speed M.2 and the RAID was only assembled in the configuration with the south bridge, in which the B550 is significantly inferior. First, the number of lines has been reduced from 16 to 10, which will naturally result in fewer connectors on the boards. Second, these are the lines of the third version, not the fourth, that is, the speed of communication of external devices with the processor is almost two times lower. In practice, this until does not matter, but in the future something may change.

Articles | What to play + the best discounts of the week. Minecraft Dungeons, The Elder Scrolls Online: Greymoor, Maneater, Mafia 2 and Saints Row 3 Remasters 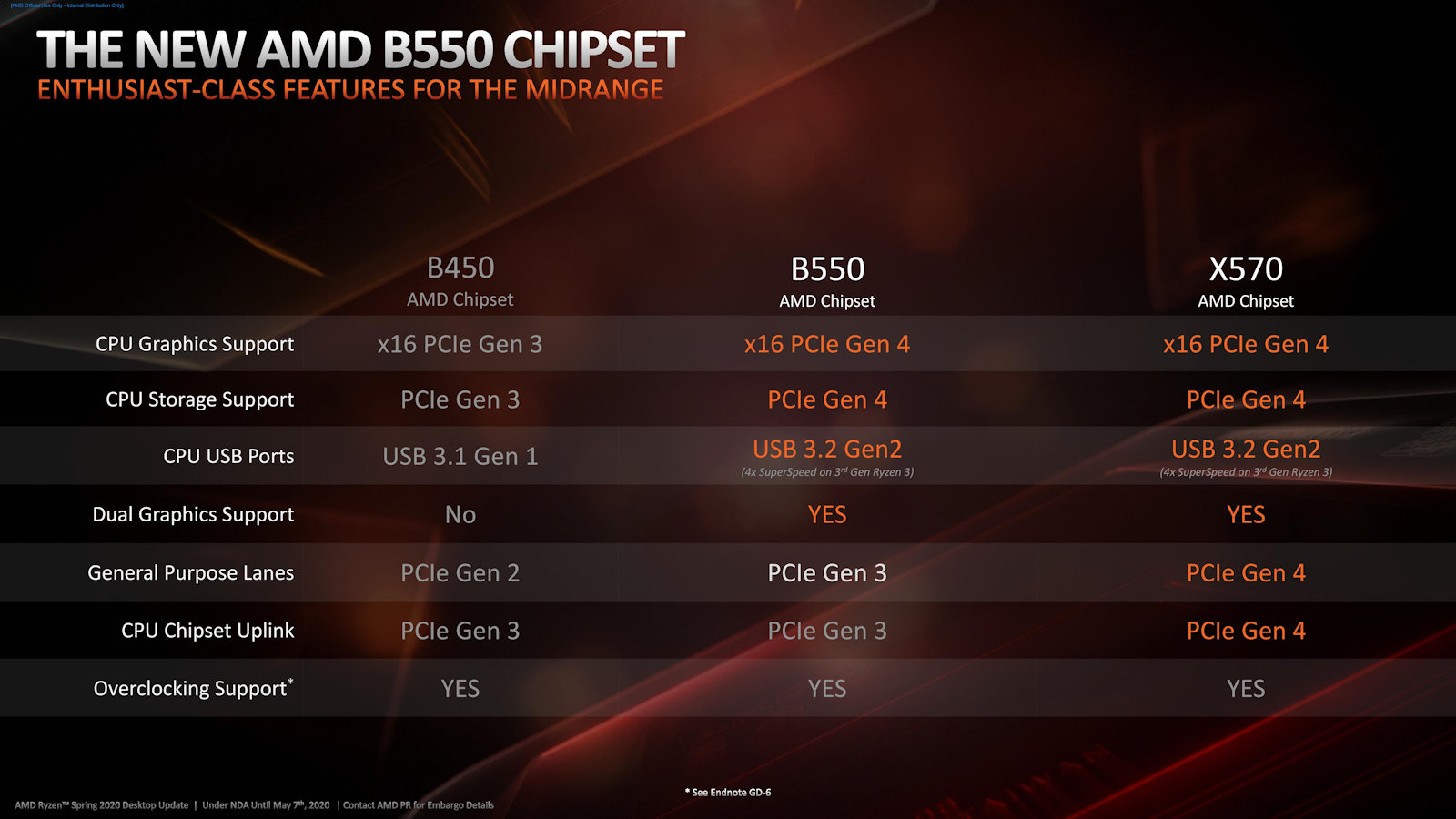 As for the comparison with the old B450 chipsets, the main difference between the B550 is the work with the fourth version of the processor lines and, of course, the complete transition of the south bridge to PCIe 3.0. In 450, for example, the lines of the second version were still in use.

Well, one cannot fail to note the difference in compatibility with the processors. Be careful and remember: the B450 works with all Ryzen. But the new B550, like the X570, supports only Zen 2 and the future Zen3, that is to say with Ryzen 1000 and 2000, they do not work. So if you are upgrading an old motherboard, keep that in mind.

Now let’s talk about Gigabyte. Let me remind you that we have the B550I Aorus PRO AX on trial. Gigabyte himself calls it “the ideal card for building compact and powerful gaming systems.” And that’s a very correct description, because we have a mini-ITX with a great CPU power system and everything you need to build a serious machine in a small package. 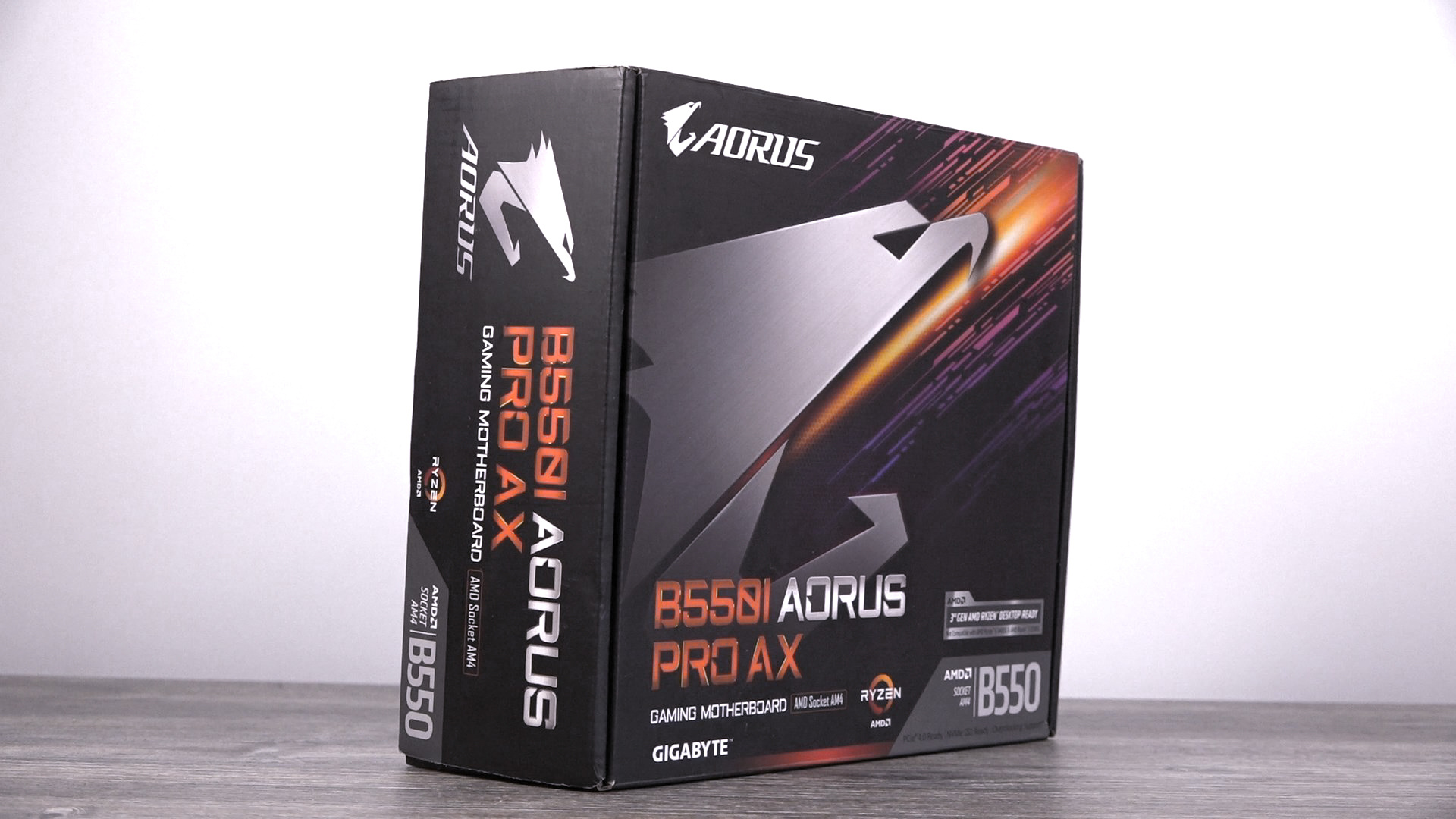 The board comes in a nice box. Inside there is an instruction manual, a CD with drivers, two SATA cables, and a Wi-Fi antenna almost the size of the card itself. The motherboard looks very technologically advanced: it’s small, but so much has been pushed into it that there’s no more living space.

Historic day for AMD: its new Ryzen 5000 crush the best of Intel according to various independent analyzes 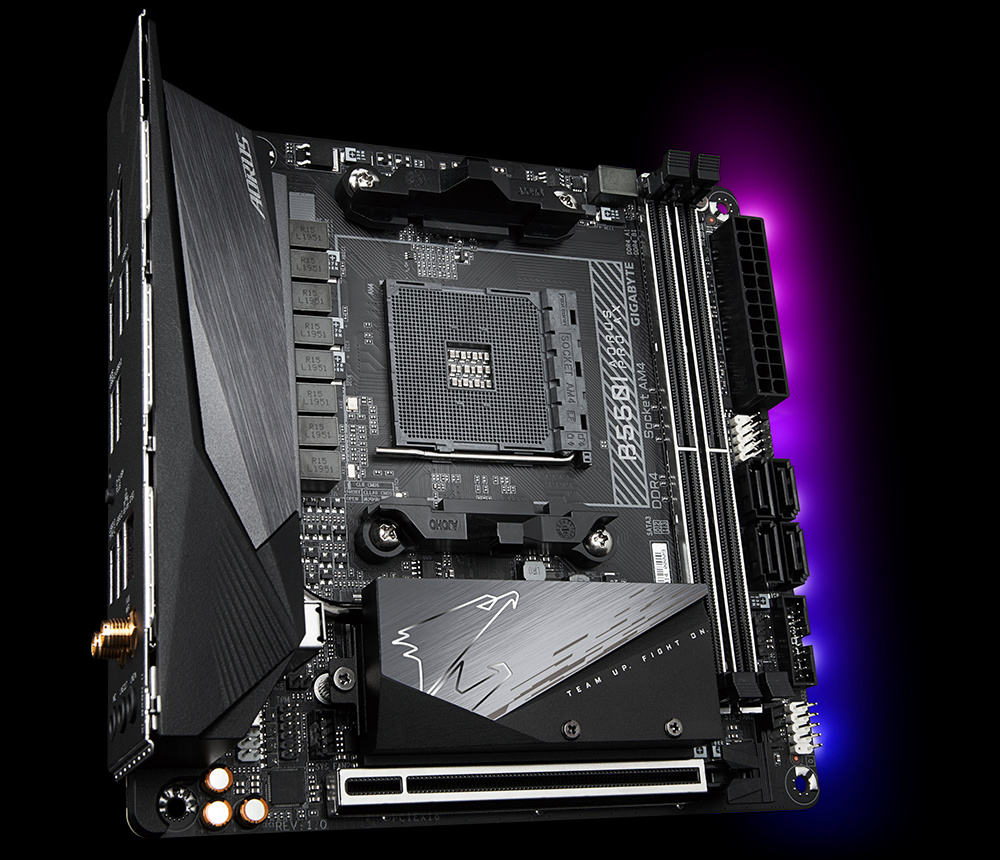 Most of the area is occupied by the processor socket and the power system. This is the AM4 which, let me remind you, only works with the Ryzen 3000. It is powered by six lines of 90A each, which in theory should be sufficient even for a sixteen 3950X. hearts. Two other power lines go into memory.

According to tradition for such formats, only two locations have been created for this. The total quantity of boards can be up to 64GB and their speed can be up to 4866 MHz for the standard Ryzen and up to 5300 for the APUs. In the latter case, the memory can be divided.

Articles | How did the free Helltaker become a cult sensation? 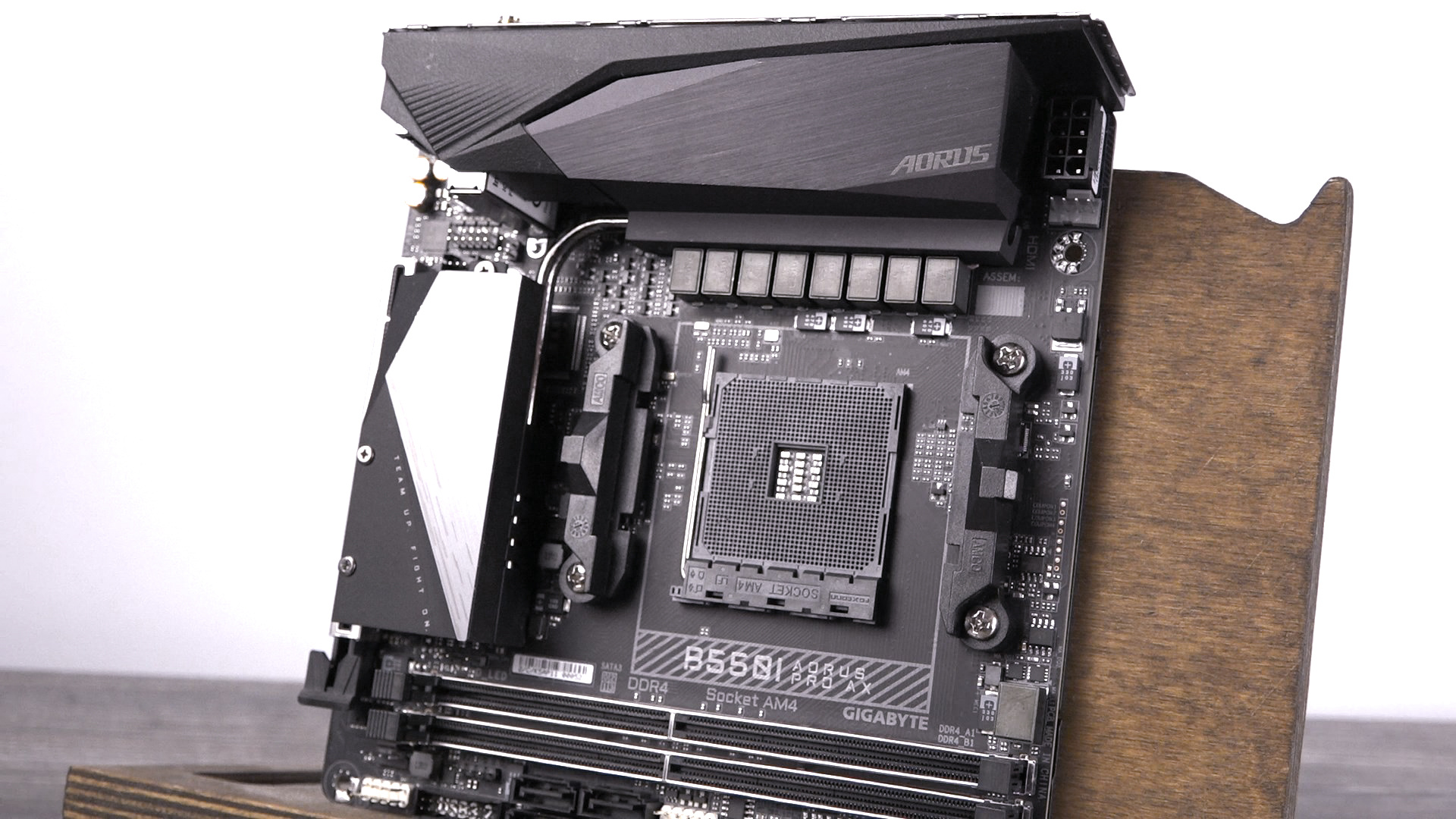 The motherboard has a standard power supply: ATX for the 24 pins and 8 pins for the processor. It’s conveniently located – even when assembled in a small case, you can easily reach for it and throw the cable away. Next to the 8-pin socket is a connector for a processor fan. For housing there are two pins at the bottom of the board which, again, is enough for a small block.

As a result, we additionally have outputs to the front panel. The block, however, is not marked, so you have to read the manual and the speaker output is set separately. There are also pads for external USB, both for 3.2 and 2.0. Contacts for audio and lighting bands are also in place. From the board commands there is a jumper to reset the BIOS, a button from the Q-Flash Plus firmware (it works without a processor, memory and video card) and, exceptionally, there is a contact pad to measure voltages. It is located above the processor socket.

There are four SATA drives on the board for the drives, connected to the south bridge, and two M.2 2280 sizes, one of which is soldered on the back. It is connected to the chipset lines and runs on PCIe 3.0 x4. And the front M.2 is already sitting on processing power and runs on PCIe 4.0 x4. They also have four USB ports on the rear panel, two more are connected to the chipset. DisplayPort, two HDMI outputs, acoustic outputs and network connectors for a WiFi antenna with support for 802.11ax and 2.5 Gbps LAN are also found here. They naturally work on Intel and Realtek chips. Sound, by the way, is built on Realtek ALC1220-VB… By tradition, it receives Japanese Nichicon capacitors and shakes the headphones well at 64 ohms.

You can now buy Bitcoins with Apple Pay 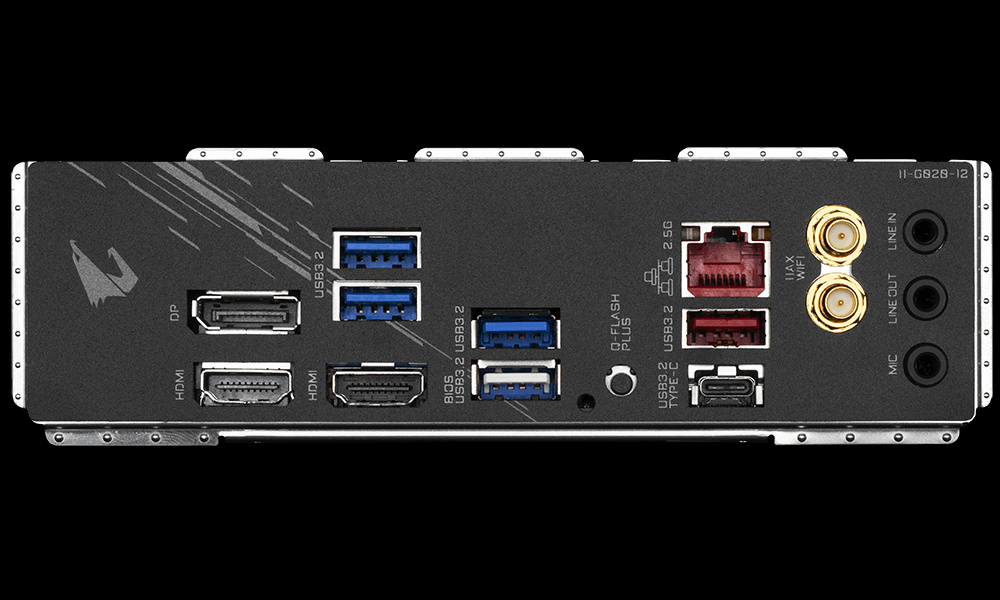 Now on the cooling: the heat of the VRM is dissipated here in every possible way. First, the back plate is connected to the board in the MC drivers area. Second, the VRM is covered with a heat sink large enough for such a motherboard, which is paired with an I / O panel. Third, through the heat pipe, the heat is additionally conducted to another heat sink at the bottom from the menu. It covers both the chipset itself and the main SSD. In addition, the reader additionally sits under its own piece of aluminum with a thermal pad.

Putting it all together on an open rack or in a full tower wasn’t fun at all, so I took a suitable case from Fractal Design and built the next-gen mini-Xbox in it. The processor is set to 3600X. I took two 8 GB 3600 MHz USB drives. The drive got stuck in 500GB of OCZ and used a Gigabyte RTX 2080 Windforce OC 8G as the video card. There were no issues with the assembly – given the small space, some jumpers like BIOS reset are not easy to reach, but that’s normal with such a size and dense layout.

Radeon Boost under the microscope: will new dynamic resolution technology be a turning point for AMD? - article

It is much more important that the system boots the first time. The disks resumed, the memory began to work on native profiles, and the VRM, even under Prime 95, did not heat above 40 degrees and provided the “stone” eats about 120-125 watts . As for the map settings, in general, there is everything you need. If you want, you can overclock the “stone”, work on nutrition, and dig deeper into memory. It’s the same with software: there’s backlight control, overclocking in Windows, and full customization of all fans.

As a result, the B550 has the following layout: As before, AMD’s middle segment does not differ much from the upper segment. Overclocking is in place, you can set all frequencies from memory, and all the restrictions are mostly for external strapping. The only frustrating thing about the B550 is the price: for some reason the cards almost cost like the high-end X570.

Intel in the face of competition that overwhelms it: AMD, Nvidia + ARM, the failure in mobiles, and now Apple abandoning the ship

As for the B550i tested, I have no complaints about it. It has everything you need to build a high-end mini PC. And, more importantly, everything is working fine and is not buggy.

Atari combines blockchain, ancient glory and the hope that retro collectors are insane

Demon’s Souls: Everything about crafting, forging, upgrading weapons and upgrades

Endless drama, or the history of the development of “Endless Summer”

6 games for the PS5 to launch that cost nothing!

FIFA 21: World Soccer Agency and Mkers in collaboration in the world of eSports