Is it worth forgiving everything else for a good idea?

In category “In plain text” the authors express exclusively their own opinion, which may not coincide with the opinion of the editorial board (or may coincide). They are free to do so as they see fit and in any format that suits them. Everything is possible here.

At the heart of Carrion It’s a very simple idea – it turns the typical horror story upside down. Imagine ” SomethingCarpenter, where the main character is not the character of Kurt Russell and his comrades of doom, but the alien creature itself. Which, moreover, is extremely offended by those who unjustly imprisoned her at the North Pole. True, in the game, unlike Carpenter’s cult film, the monster is not based on cunning, but on brute force, dozens of tentacles and several pairs of jaws.

The developers themselves of Phobia play studio call their project “reverse horror,” but in fact, of course, Carrion is never an eyesore – more of a bedroom platformer with elements of “metroidvania”. You play as a toothy, bloody piece of flesh with tentacles, locked in the bowels of a secret laboratory. The task is simple: you must free yourself and revenge yourself on all the people who get in your way. And there will be many, to put it mildly. Apparently the little people guessed what they were dealing with, so the lab is well protected – the connecting compartments between the levels are reinforced with shock-proof doors, like in bomb shelters. They are not that easy to open: you first have to gobble up a dozen or two victims, grow bigger and take root in a number of checkpoints.

Based on the trailers and screenshots, you might think Carrion, like the studio’s previous game, Butcher, will be a festival of insane violence, but no. In fact, it is almost entirely related to simple puzzles; it turns out that their decision is still linked in one way or another to the murder of the lab staff. The checkpoints that must be activated to open the next location are often hidden in secluded spots behind multiple layers of doors, levers, and lasers. There is only one way to reach them – through evolution.

Thrilling nests, where you can save and restore health, evoke “good” memories of Zerg Hives

Hero (if this is can be called a hero) Carrion is not only fuel for nightmares, but a living and extremely pragmatic organism. He needs people mainly for calories: after devouring the required number of victims, the monster grows bigger and takes on a new form, and with it – new abilities. The skills of the first, the smaller form, are meant for stealth: you can briefly turn invisible to sneak past the turret, or entangle a boring drone with a nasty “web”. The second form is already large and heavy enough to break through fragile walls with its weight and crush enemies to death, and the third, in principle, barely goes through doors and prefers to attack enemies with chitinous harpoons.

The Witcher 3 on Switch: what are the advantages of mods and overclocking? - article

In this regard, the developers have given the best of themselves: the appearance and sound design of Carrion’s monster is excellent. With just one glance at the wiggling tentacle in the main menu, you already want to hide in the shower and never leave it, and in the game itself that slimy feeling of discomfort increases several times – especially if you’ve ever seen a teratoma (search for photos at your own risk)… The creature obeys the laws of physics and moves around, clinging to different surfaces by its branches. The procedural animations have virtually no effect on the gameplay, but the spectacle turns out to be really disgusting – like I stumble upon a ball of snakes or a rat king. It sounds disgusting, but you still can’t take your eyes off. I still want to stick to the walls and ceiling, just to see how the amorphous mass of flesh will behave, like playing with a toothy “slime”. 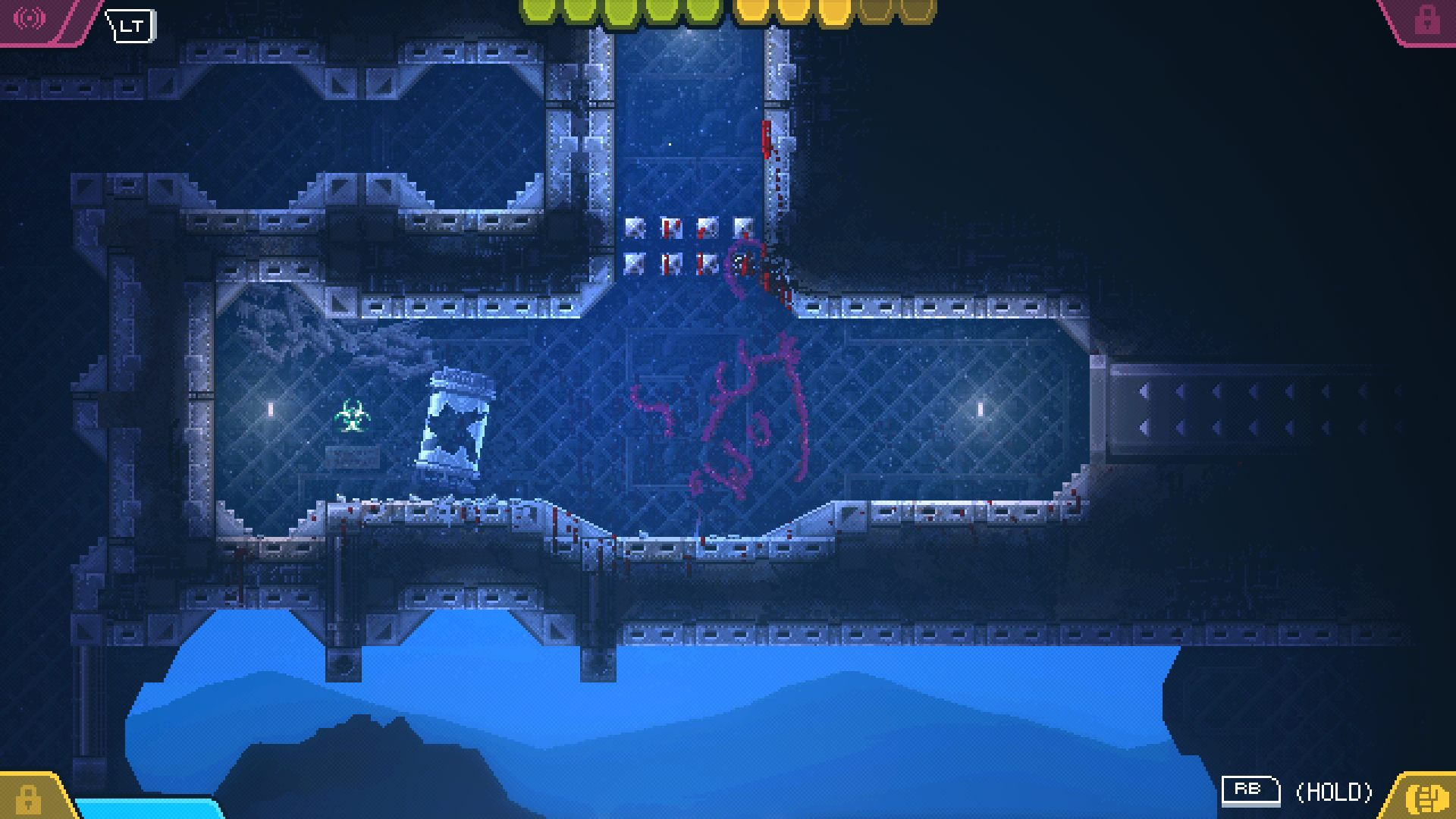 One of the upgrades (in their role here are DNA samples) allows the monster to collapse into a bunch of agile worms on contact with water. Lovely, just lovely

Carrion’s problem is just one thing – she has absolutely nothing more to offer. On the one hand, it seems like she doesn’t need to offer anything: the idea of ​​the game itself is unusual enough to attract attention. In addition, it will only take five hours – the player will not be entertained for long. On the other hand, the question arises: is it worth forgiving everything else for a good idea? If you think it’s worth it, Carrion will surely suit your taste. But, in my opinion, fun as the idea is, it’s still all about the implementation – and Phobia Game Studio has done so.

Ironically, a game entirely dedicated to a bloodthirsty monster rarely gives you the opportunity to feel like a monster. An unstoppable threat that cannot be understood and cannot be negotiated. Carrion’s enemies may be weak, but they’re by no means defenseless: every second civilian has at least one pistol, and guards armed with rifles also cover themselves with energy shields to avoid being eaten. Not to mention the various turrets, drones and heavy mechs equipped with machine guns. People aren’t at all happy with you, and if you get into a fight ahead of time, you won’t even notice how they’re going to turn a mountain of tentacles into a sieve – or burn them with flamethrowers.

A brief introduction to Sakura Wars, the RPG saga born to save the Sega Saturn 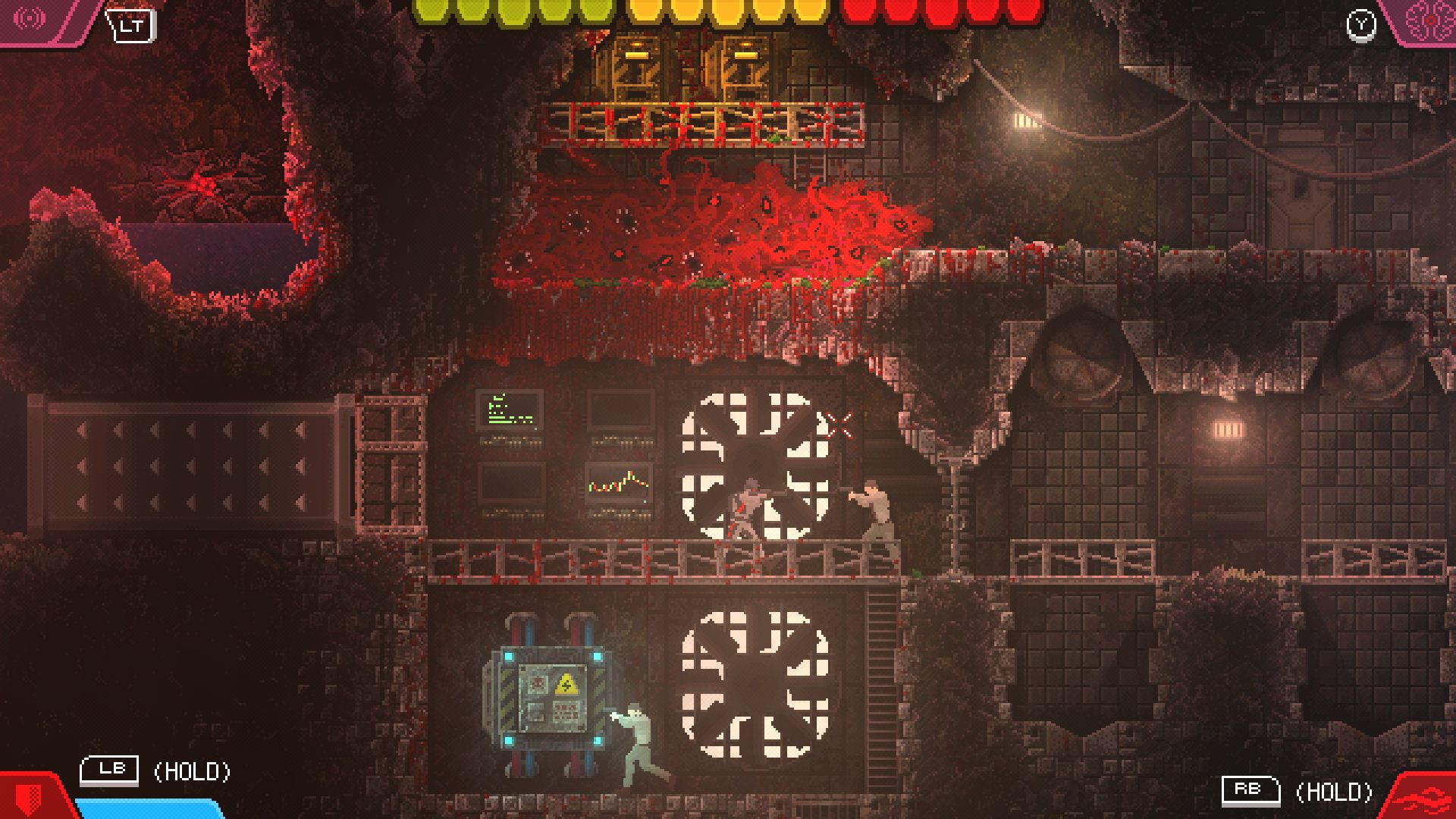 Blood is pouring over the guys in the ceiling, but they don’t mind much. What could possibly go wrong?

This sometimes leads to organic game situations. With health, the monster loses muscle mass and gradually returns to previous forms, which means that it loses its most powerful abilities. You have to change tactics along the way – sneak through sewers and ventilation pipes, lure opponents into a trap, and grab their attention with noise. But here the game is let down by some primitive AI – dividing up a team of trained fighters and killing them one by one is as easy as peeling pears. To do this, you don’t need to tweak or think about how to use the skills smarter – just know each other and drag idiots through the same hatch. They still won’t call in reinforcements and won’t find to throw a grenade into your lair – apparently, according to the charter, they’re not allowed.

In other words, Carrion is constantly keeping the player in some kind of borderline state. You are not strong enough to sweep away all enemies with a blood whirlwind, but you are not weak enough to feel truly vulnerable. It’s a good idea, but the game designers didn’t seem to know what to do with it and how to challenge the player in its setting – and so the gameplay gets boring very quickly. An hour later, all the battles and puzzles merge into a solid gray-brown mess, and the remaining time passes like on autopilot, without any emotion. 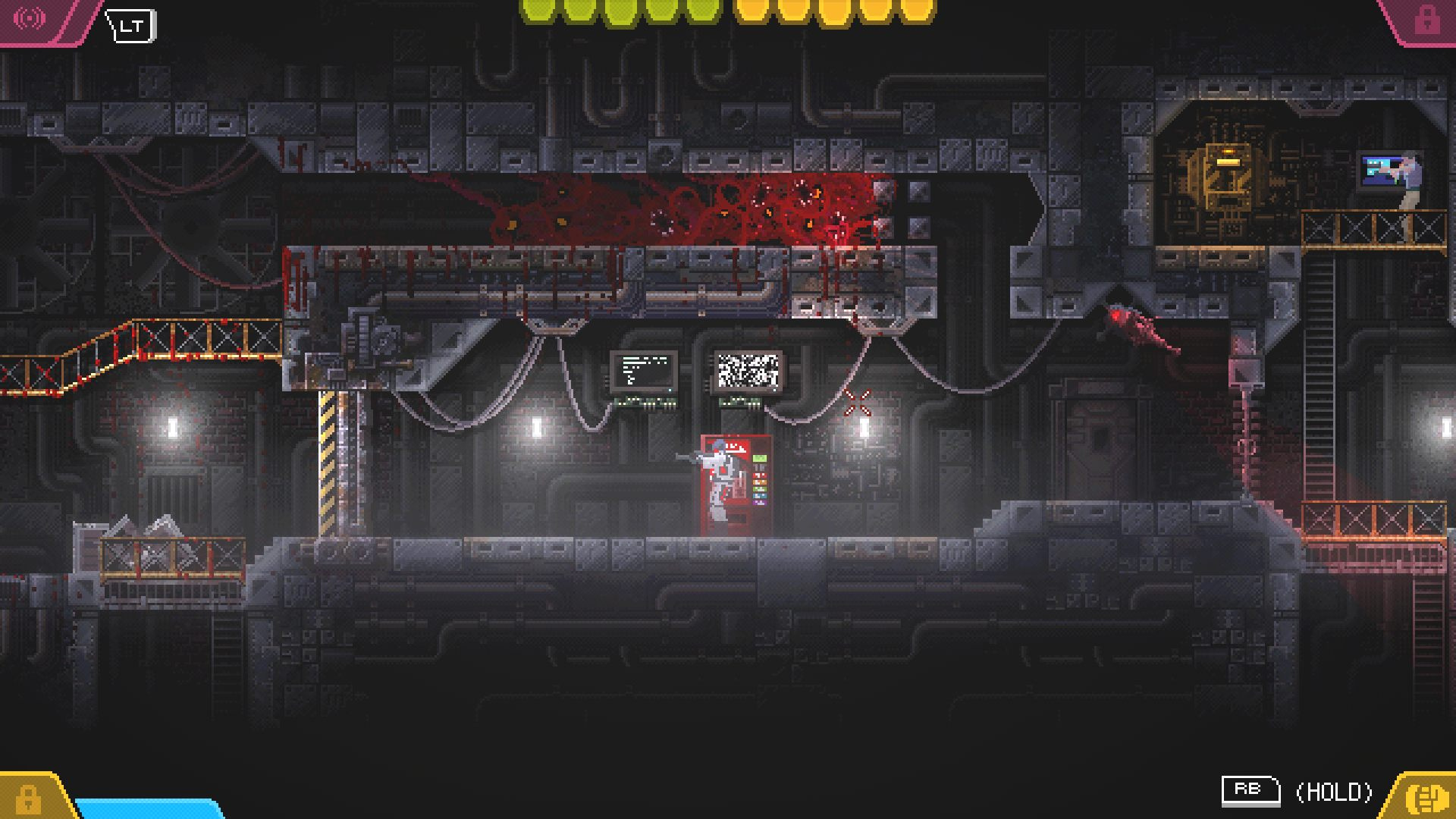 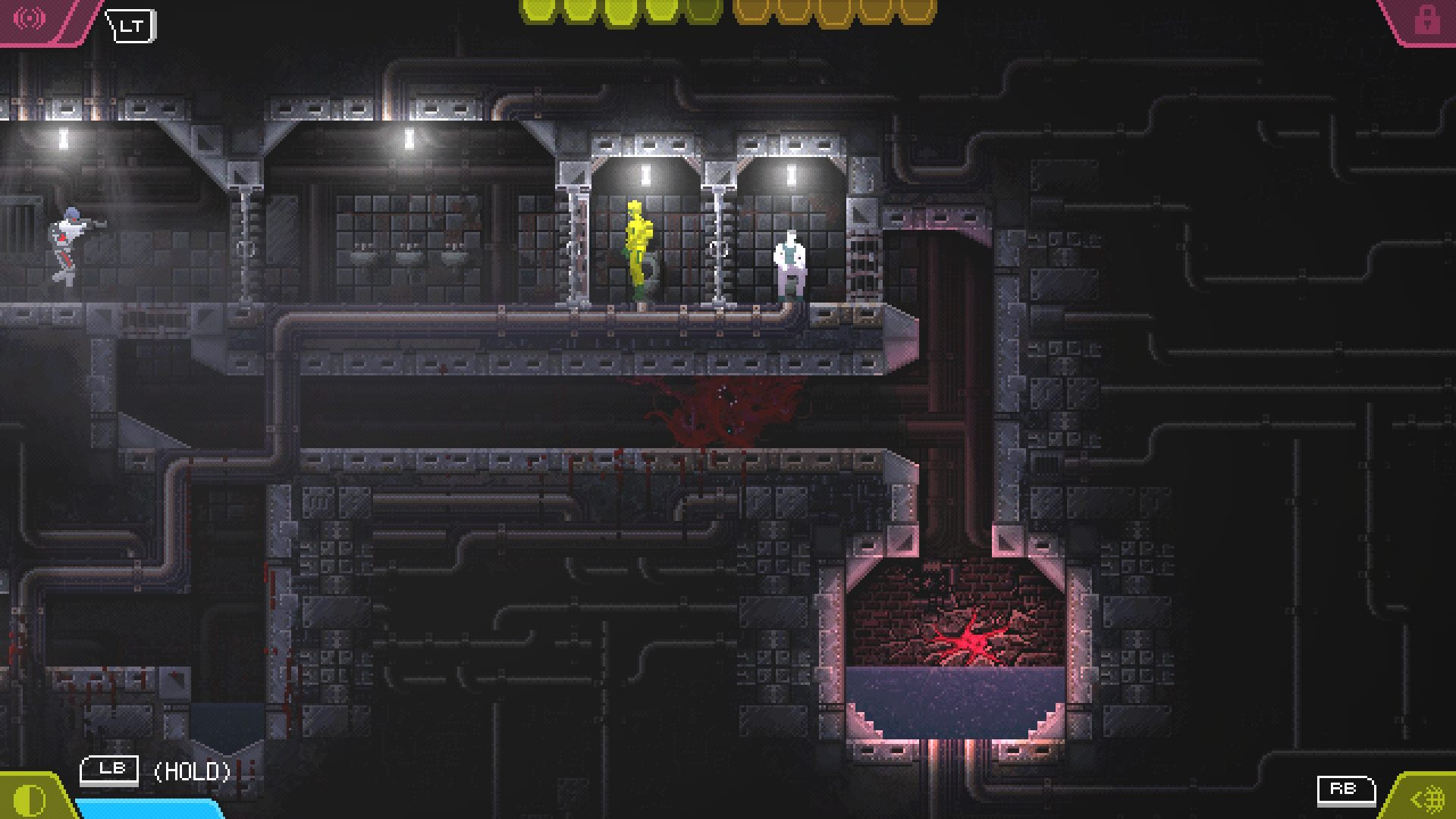 Although, I must admit, the side of such “stealth” looks rather disturbing, with a drop of dark humor. The creature is absurdly flattened to crawl through narrow passages and catch the victim by surprise in the most inconvenient place – in the toilet

The caricatured and hypertrophied violence might distract from the monotony, but the authors did not bother to provide this violence with at least a conspiracy context. How many times do you have to repeat that the plot never spoils the gameplay in any way, but on the contrary fills it with meaning! It is not necessary to explain where the monster came from and what experiments were done on it – you just need to create a background. But Carrion doesn’t have it either. You start the game in an incomprehensible place and walk towards something incomprehensible without any motivation. There isn’t even the feeling that people are trying to interfere with you – they’re just going about their business while a local apocalypse takes place in the lab.

And if they don’t care what happens to them, then why shouldn’t the player? 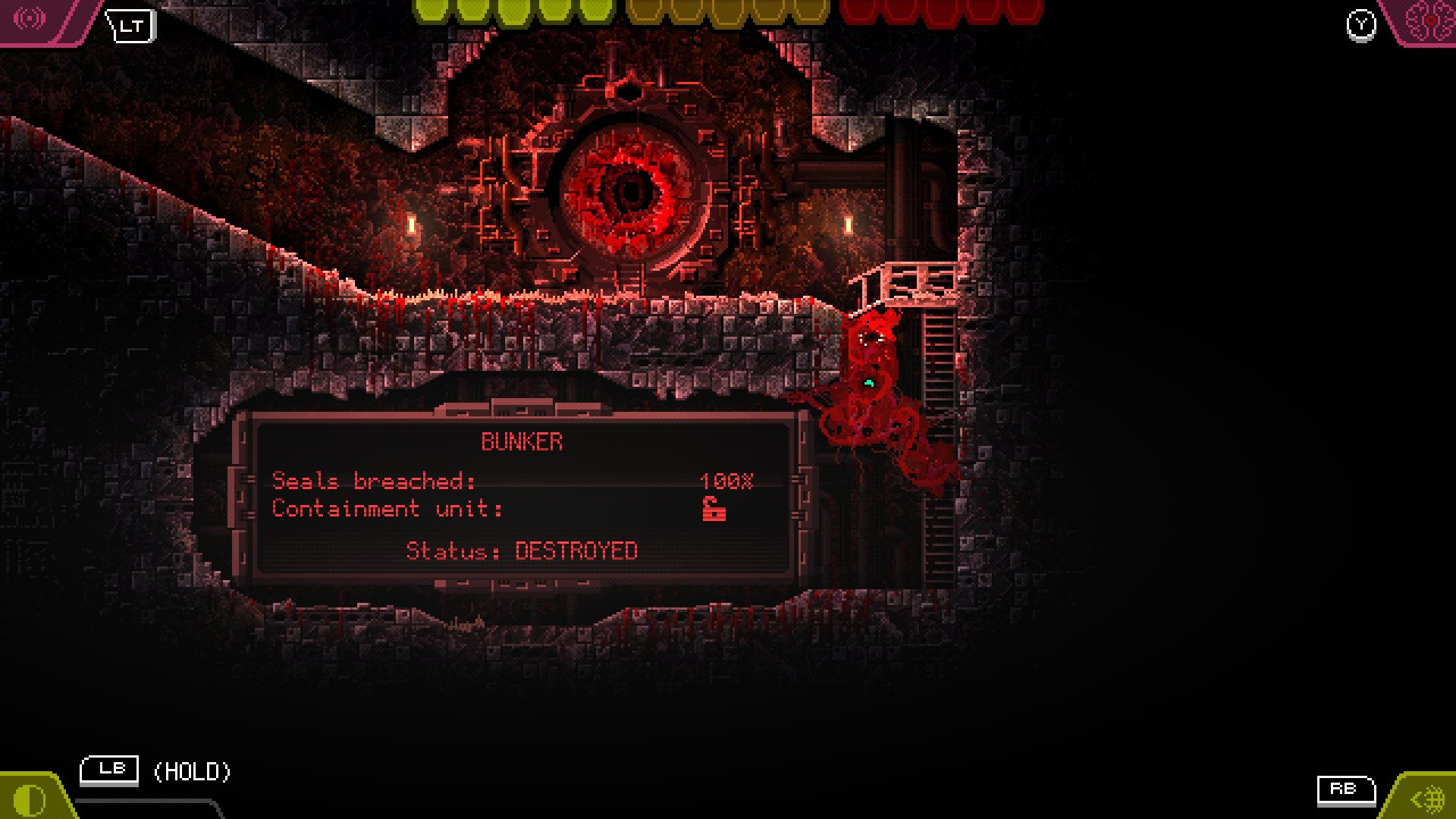 Alas, from a curious idea, Carrion could not turn into an interesting game. At least if you put it on a par with Hollow Knight, Rain world or MO: lost… But a C for diligence isn’t bad either, especially for a small team of a few people. Moreover, such compelling and scary monsters are rare even in AAA games.

MIUI 12: all the news from the Xiaomi personalization layer and which phones will receive the update

Destiny 2’s major new expansion, Beyond Light, arrives in September and two more are announced. There will be no Destiny 3

Every image, a story: we interviewed Renata DÁngelo, Fernando Merlo and Dominic Dähncke, three of the winners of the iPhone Photography Awards 2020

If you have battery issues in iOS 13, try this trick

In no Spanish province do as many people die proportionately as in Ciudad Real: 190 per 100,000 inhabitants