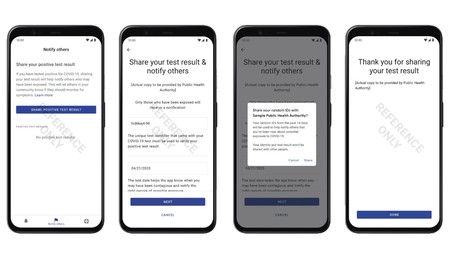 The Spanish government is today launching the contact tracking application based on the Apple and Google systems. For the moment, this tool will only be available in San Sebastián de La Gomera, as it is a pilot project to study its viability.

Contagion tracking application will be called COVID Radar and it is managed by the Secretary of State for Digitization and Artificial Intelligence in coordination with the Canary Islands Health Service. Similar applications are used in countries like Germany, Italy or Switzerland, Spain is now starting its own application, although in September.

Today begins the first phase of the contagion alert application pilot. The application is based on the “COVID-19 exposure notification system” that Apple and Google have developed. The COVID radar will work on both Android and iOS and today it has been sent to the respective application stores for validation.

Personalize your Samsung Galaxy with Home Up, a new application for the mobile interface

At the time of its publication in store, the application can be downloaded but it will only perform its functions in the La Gomera region. The process of this pilot plan is divided into three phases, as explained by government sources.

First there will be a start-up phase. This is the one that starts today, where a communication campaign to promote its use. This campaign will also be carried out between the shipping companies and the airlines operating between the islands, so that when it extends to the Canary Islands, the other islands will also be informed. The project has different volunteers who will help the population to install and use the application.

The application is based on the European DP-3T protocol. From the government, they explain that “its operation will be verified by fictitious identifiers, with positives and negatives generated, in order to be able to verify the functioning of the notification system by adjusting its operational threshold to avoid distortions in a future real scenario”.

Google and Apple have already shown examples of images with the appearance that this type of application can have. Here you can see how the user can share the data of an infection.

The pilot will last two weeks and the participation of at least 3,000 citizens of La Gomera is expected. 300 technicians will pretend to be infected with a coronavirus to test the effectiveness of the application algorithm.

What is the schedule

Initially, COVID Radar will only allow you to interact with the menus and will continue to operate in the background, but Contagion tracking with simulated positives will not begin until July 6. From this date, the tool will establish a first initial positive. Thereafter, there will be three waves of simulated infections on July 19, 13 and 17. From these waves “daily monitoring of the collected indicators will be carried out to monitor the progress of the test and detect the relevant milestones”.

Finally, from July 20, the data obtained will be collected and the pilot’s performance will be studied. Among the factors you want to check is the level of adoption and how many people have downloaded it. And the higher the level of penetration and the more people use it, the more effective the monitoring will be. In Germany, the app has already been downloaded by more than 12 million users.

More transparency and more protection for developers: this is the new European law for application stores

Once the pilot is finished, his efficiency will also be checked. user engagement in notification and retentionIn other words, how many users kept it active after downloading it. Depending on the result, SEDIA will take one or the other decision for its expansion at the national level.

About the Spanish drug which is said to have “an antiviral activity 2800 times greater than remdesivir”: what we know about plitidepsin

Negative in an antibody test against COVID does not mean that you have no immunity: the unknown of other immune systems

We tested COVID Radar: this is how the contact tracking application that we will use in Spain works

Translate, the iOS 14 application with which we can have a conversation with everyone and in all languages

Spain will start in La Gomera the pilot phase of its contact tracking application, it will use the API of Apple and Google

Animal Crossing: the best islands of New Horizons and the most beautiful inspirations

PRO tip: you can ask Siri to show you your password from Apple, Amazon or any application

Animal Crossing New Horizons: Get a repeat address and visit other islands in a dream

The surveillance system of Apple and Google divides Europe: Germany defends it, Spain is not positioned and the United Kingdom announces its own application

The best and most faithful adaptation of I Am Legend is Spanish, from 1967 and has just been resurrected on the Internet

In no Spanish province as many people die proportionately than in Ciudad Real: 190 per 100,000 inhabitants

Google Duplex already works in Spain: the service speaks Spanish and confirms the timetables of establishments

Trying to clean up cocoa contact tracking apps for COVID-19 (Clear the X, 1×93)

Call of the Sea is the first Spanish game announced in the Xbox Series X catalog: we talk to its creators

No tracking app, no GPS: South Korea asks operators to locate anyone who was in the infected bar area

Google Against Spam Calls: Your Phone Application Checks Businesses And Explains Why They Call

Some options for FaceTime: auto zoom and eye contact

We tested Immuni, the first official European contact tracking application based on the Apple and Google systems