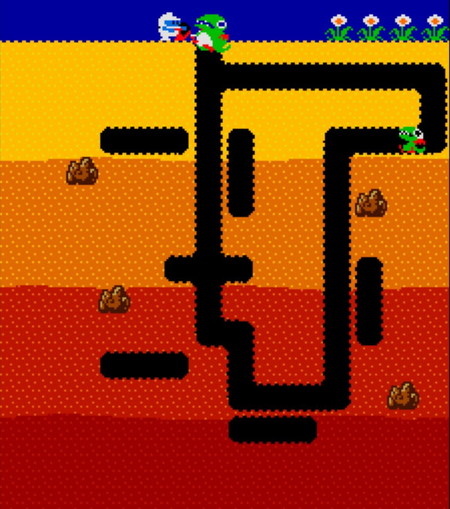 In the inevitable shadow of the legendary 1980 Pac-man, Dig dug This is another of Namco’s great classics from the early eighties. A Arcadian purebred that presented us with a seemingly simple goal (defeating all enemies onscreen), but ended up being an odyssey in later stages.

It’s a classic that whenever possible the current Bandai Namco saves it in one of its multiple builds, including, of course, the first cartridge for the Evercade handheld console. And the truth is we feel like pay him homage.

Dig dug It’s one of those arcade types that perfectly reflect an unforgettable moment, as it took little to please the audience thanks to a mechanic that was interesting and demanding enough to bite the player.

In this case, we had a protagonist, who gave his name to the game, with the aim of getting into the deepest part of the earth to destroy two types of enemies: Pooka and Fygar. The first was red and wore some kind of diving goggles, while the second was a green dragon that breathed fire.

First complicated point: the two enemies ran faster than us. And not only that, but they could cross the earth at any time, showing their eyes, until they found our position. And here we had to act very carefully and quickly, because our weapon, a harpoon capable of inflating enemies until they explodeIt was quite limited and could only be done one by one. Good? Let a bloated enemy not move for a few seconds, much like in Tumblepop and video games of that other style.

We could dig horizontally and vertically, but to use the aforementioned harpoon we needed some leeway, hence the difficulty. There were some thinner walls where the harpoon could be stretched to surprise the enemy without being able to hit us, but it was always a risk and you always had to be very careful and strategize from the start. Nothing to go to tuntun. 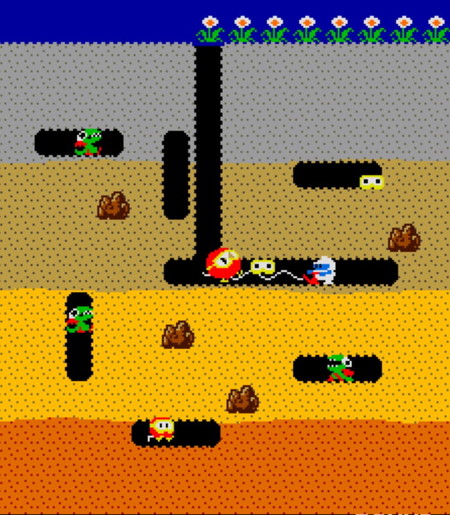 If it was already difficult on the pitch, making a perfect game was even more difficult, because if we wanted to fatten the scoreboard, the main focus here was those rocks that we could crush enemies if they were on the same path. It should be remembered, by the way, that the mythical Boulder Dash, with a similar mechanic, will not be released until 1984. Yes, two years later.

Returning to the rocks, they had another hidden function: if we dropped two rocks in the same phase, one fruit or vegetable as extra points (which had to be collected, with the pressure that this implies). And it certainly wasn’t as easy a task as it might seem due to the enormous aggressiveness of enemies to chase us away at any time, seconds after we left.

And to make it more interesting if possible, the more depth there was on the same screen (there were different layers of different colors to differentiate how many yards we were), the more points there were. But no matter how many years go by, I’ll continue to choke on this Namco classic and feel useless.

A very curious and funny detail is its soundtrack, because it is only the most playful when we move the protagonist. If we stand still, the most absolute silence. If we move, it begins to ring with a very characteristic rhythm, accelerating when there is only one enemy left on the screen, who will try at all costs to escape. And all this to put us in tension, of course.

Surprisingly, his sequel (Dig II, 1985) radically changed its proposition by betting on a zenithal perspective. And it was not until entering the 21st century to receive a remake in 3D of the first by Infogrames and another Namco opus exclusive to Nintendo DS in 2005.

Did you endure the passage of time well?

Yeslike any good Arcadian of the time. Despite its limited control, this is part of the nature of Dig Dug itselfTherefore, it is one of the deepest hobbies if we are to master it. If ever we are successful. I have already given up, even though I left the year I was born.

Gears Tactics: Guide of all enemies

In remaster, Crysis can significantly improve the behavior of enemies

Articles | What to play + the best discounts of the week. Deep Rock Galactic, Crucible, The Wonderful 101: Remastered, Atom RPG: Labor

Back to World of Warcraft with WoW Classic

What were we playing in 1988? These are the 19 best classic video games of this year

Retroanalysis of Paper Mario, or how was the birth of the fabulous saga starring paper Mario

What is Dark Web, how is it different from Deep Web and how can you navigate it?

They detect four objects in deep space never seen before: a kind of gigantic rings with a shiny edge

We played Paper Mario: The Origami King, a return halfway between the classic side of the saga and the modern

Burnout Paradise Remastered on Switch: A New Life Classic for Playing on the Go – Benchmarking

Trackmania review: The classic, spectacular and unlimited driving experience The genre you are looking for

Trailer for Crash Bandicoot 4: Its About Time: the legendary marsupial returns with an adventure true to its classic casual style

PlayStation Classic – games, release, pre-order, controller and everything we know

A New Look at the Additions of Final Fantasy Crystal Chronicles: Remastered Edition, the Resurgence of a Classic Co-op

The deepest artificial hole in the world: 12.2 km deep, rarities and (a lot) of heat

Resident Evil Village in a giant getaway between enemies, weapons, combat and more

This signal comes from deep space every 157 days: astronomers do not know why