Google Lens is an extremely useful tool for connecting real world elements with the digital world. Thanks to the smartphone’s camera, it allows you to scan and translate text, recognize text by hand and transcribe it digitally, locate yourself on a map, recognize a restaurant menu or simply recognize all of them. kinds of articles and search for them on Google. To all this, Google now adds an additional function: recognize and solve mathematical equations.

This new feature is being rolled out gradually to all users, as announced by Google. To check if it is available, you must open Google Lens in the Google app and among the available camera functions, choose “Homework” (the icon with a student hat).

In this academic mode, Google Lens will recognize all kinds of equations and other concepts from the world of studies. From there it’s enough select one of the recognized equations and it will give us explanations, a step by step solution or directly the solution among other things. 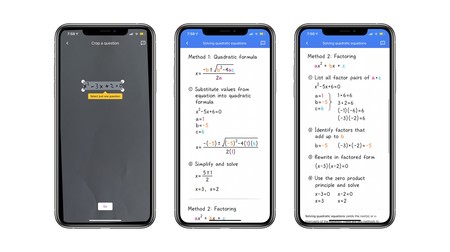 The same functionality and equation of the Socratic app.

The new Google Lens feature is part of a larger Google effort to provide academic resources for students who need to home study in the next class due to COVID-19. Along with this math option, Google also announced the integration of STEM concepts with understandable explanations of biology, chemistry, and physics when searching for terms and ideas on Google. This allows, for example, that when searching for atoms we can see them in 3D and through augmented reality as happens with animals, dinosaurs and insects from Google.

On the other hand, they highlight the arrival of Read Along, where a virtual assistant helps children read by recognizing their voices, reading alongside them and showing them exercises of words. Google also says they’ve added improvements to Google Meet for teachers, such as automatic captions (although in English only).

Home controls, notification conversations, and credentials API will not be required on Android 11

Oxford coronavirus vaccine also gets antibodies: vaccine race is tighter than ever

Neo Geo’s Definitive Samurai Shodown Collection will come with a surprise, plus it’s free on the Epic Games Store!