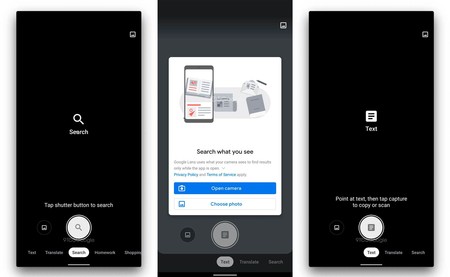 Google Lens is an application integrated into the search application that allows you to recognize buildings, animals, perform translations on the fly and, soon, will also solve math exercises using camera and artificial intelligence. Not only that: Google Lens is about to change its interface to an interface very similar to that of Google’s camera.

Few Google services offer as much help as Lens, a software suite that uses augmented reality and artificial intelligence to recognize everything around us. Lens is very practical for translating poster texts or copying them for later transcriptionFor example, also to read QR codes or identify dishes on a menu. And Google will introduce more options in addition to an aesthetic change for the application: it will be simpler, minimalist and more comfortable to use.

The app, integrated with the Google search app, will change from huge round buttons to a lower navigation menu with tabs with rounded corners. As can be seen in the captures made by 9to5Google, the future appearance of Lens is very similar to the interface presented by Google’s camera. And there is a detail that aims to facilitate the use of a function that until now was somewhat uncomfortable to press: loading images from the gallery. Google changes the download icon down, just to the left of the capture button with the camera.

In addition to the interface, Google Lens paves the way for the integration of the “ Homework ” functionality, a tool that allows you to solve mathematical problems and other questions in the educational field, simply by taking a photo . This supplement will be very useful for all students because no need to download an app to do homework; with the advantage that Lens not only solves, it also explains how the resolution was reached. 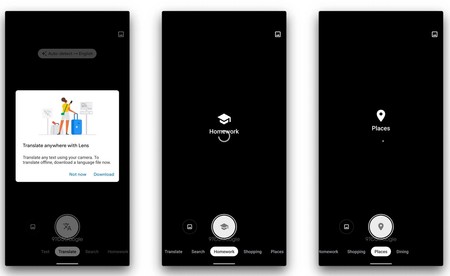 The latest addition to the recognition application is “Places”, a function that details all the companies that have their domicile in a building just by pointing the building with the camera. Businesses, stores, hours, phones and even user notes – simply by opening Google Lens.

The interface and other new features are available in the latest version of the Google search application, but have not yet been activated: it is expected that they will gradually reach all smartphones. Google will activate them on the server side and without you having to update the application.

Android smartphones as seismographs: this is how Google seeks to create the most ambitious earthquake detection network of all

More security for your Android: Access Dots alerts you if an app is using the microphone or camera

Google Stadia launch – These games are available at launch

The Honor 9X Lite arrives in Spain: price and official availability of the Honor mid-range with Google services

How to buy more space on Google Drive: options and prices available with Google One

This is One Jotter, one of the best alternatives to Google Keep for Android

102 offers on Google Play: free apps and games for a short period and many other discounts

Your smartphone’s hardware will no longer be a mystery: five free apps on Google Play to reveal its secrets

Google University: for $ 300 and in six months you will get a certificate equivalent to a university degree

Google improves the confidentiality of its assistant: it will no longer store voice recordings by default without our permission

Pixel 4a 5G and Pixel 5 to be unveiled on October 8, according to Google oversight

Nvidia GeForce Now: this is how Nvidia renews its articles service

How to reinstall missing apps from Google Play Store

Google explains how Live HDR +, one of the most spectacular features of the Google Pixel 4 and 4a, works

106 offers on Google Play: free applications and games that last little and many other discounts

The European Commission begins to investigate the Internet of Things sector and focuses on Alexa, Siri and Google Assistant

Google seeks to end beauty mode: it wants manufacturers to allow it to be completely disabled

The cloud backup mega-guide: how to back up everything on Google Drive, OneDrive and iCloud