SamaGame > AirPods > [GUIDE] : AirPods: how to use them with an Android smartphone? Part two 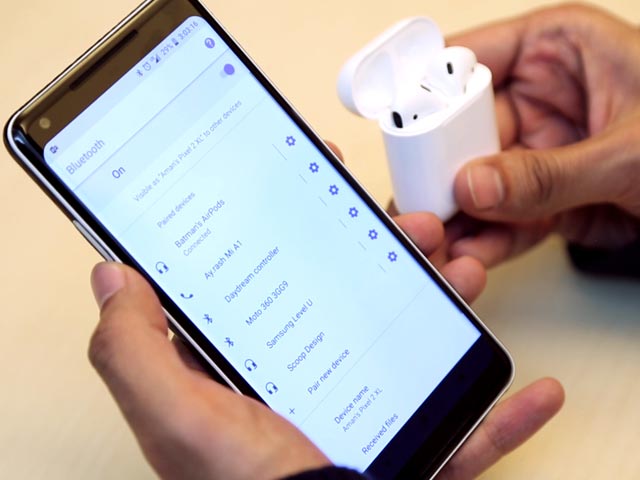 [GUIDE] : AirPods: how to use them with an Android smartphone? Part two

Once the operation is complete, take the AirPods out of their box and slip them into your ears. Now all you have to do is open your music player and play your favorite song. You can now use your Apple headphones like any Bluetooth headset.

Improve the AirPods experience on Android

It’s a fact AirPods aren’t particularly cheap. You can find Bluetooth headsets on the net with equivalent sound quality for much less. But digging a little into the Google app store, we find software solutions to unlock the advanced features of AirPods that do not exist on Android.

This is the case, for example, with the AirBattery application. Once installed, you will be able to display the battery level of your headphones as well as that of the charging box as on an iPhone. Note, however, that the measurement of the state of charge offers a lower precision than what Apple mobiles offer (10% interval size).

The AirBattery application also has a module called Ear Detection allowing you to pause your music player (Spotify, Deezer, Apple Music, YouTube, Google Play music) when you remove your AirPod from your ear. Be careful, this function is particularly energy intensive.

You should also know that the Double Tap function remains operational apart from iOs (iPhone mobile operating system). For example, you can use it to take a call or pause music. On the other hand, unlike the iPhone, the personalization of the Double Tap is impossible.

The Last of Us: Part 2 will come on two discs and will occupy 100 GB

The Apple brand’s sleek, wireless earbuds were launched in September 2016 along with the iPhone 7. Despite their relatively high price tag (over $ 170), AirPods seem to be enjoying relatively high success.

According to the Counterpoint Research firm, Apple would have sold no less than 35 million Bluetooth headsets in 2018. This represents a very high figure on the wireless headphones market. Bluetooth headsets are still a luxury item, mainly used by audiophiles and international travelers.

Externally, the AirPods take up the stylistic codes of the American brand. They retain the white color and the distinctive shape of the other models in the range. But unlike in-ear headphones, AirPods slip more easily into the hollow of the ear.

Why buy AirPods when you have an Android mobile?

Two years after their launch, Apple’s AirPods are still considered by most professionals to be the best Bluetooth headphones ever made. Users appreciate above all their small footprint and ease of use.

Each earphone has its own battery and its own microphone. It is thus possible to use only one listening device in the manner of a good old Bluetooth headset. The AirPods then activate automatically when you place them in your ears thanks to these different sensors.

Unfortunately, as we have seen previously, all these features are inoperative on Android. However, this remains quite bearable and does not penalize the user experience too much. And then the AirBattery application makes it possible to correct these various inconveniences with varying degrees of success.

[GUIDE] : How to Ring Music on Android Phone Part three

Finally, let’s not forget that AirPods remain one of the only wireless devices to offer such autonomy. With the particularly compact charging box you can easily last a day without any problem. For example 15 minutes of charging can recover 3 hours of listening time.

The only downside is that the shape of the AirPods with their long stems makes those who wear them look ridiculous. But with the generalization of this type of helmet, nobody pays any attention to it. And then if you have long hair, you can partially hide it.

How to use AirPods with an Android smartphone

AirPods are wireless headphones that connect via Bluetooth. It is true that they are designed to be perfectly compatible with Apple devices, but basically they can connect to other devices with Bluetooth. That’s why we’re going to show you how to use AirPods 1 or 2 with an Android tablet or smartphone.

[GUIDE] : What are the best accessories for AirPods and AirPods Pro Part two

Why use AirPods on Android?

Some will immediately wonder why anyone would want to connect Apple headphones to an Android device. There could be many reasons. For example :

On AirPods 2, you can imagine that the “Hey Siri” does not work. However, applications can allow you to switch virtual assistant which will allow you, when tapping, to trigger Google assistant rather than Siri. It is the same for viewing the battery percentage.

With an iPhone, you can differentiate the right earbud from the left for battery percentage and triggered features related to tapping. On an Android device, this is not the case.

You can pick up a call by tapping, but also change music, play or pause. Switching from stereo to mono is performed correctly if one of the 2 devices is in the box. Normally, when you take off an earphone, the music pauses. It doesn’t seem to work with all Android smartphones.

Step 2: How to Use AirPods on Android

2.1. Pair the headphones with the smartphone

Although AirPods are optimized for iOS, pairing with another smartphone is not very difficult.

[GUIDE] : How to guess who are the impostors? Part one

2.1.1. Check that your AirPods 1 or 2 are in their case, with a minimum battery for the headphones and the case;

2.1.3. Hold down the single, small round button behind the case;

2.1.5. Your smartphone should detect them, you just have to press on the name of your AirPods.

Your AirPods are now paired and ready to be used on your Android smartphone, or tablet. All you have to do is wear them or add additional configurations.

2.2. Applications that fill in lost functionality

It is normal for AirPods to have Siri integrated, but on Android it is normal to want Google Assistant.

There are applications such as Assistant Trigger or AirBattery that allow you to set Google Assistant with a double tap and show the battery percentage of AirPods in the notification center. Some also allow you to pause music when a headset is removed. However, it doesn’t seem to work with AirPods 2.

Dead Island: Survivors is now available for iOS and Android

Although a little less fluid than on Apple devices, AirPods can be used with Android tablets and smartphones with good functionality compatibility.

If you are looking for slim and elegant cases for Samsung Galaxy S9 or S10 you will find a selection of the best slim cases on the Kord store:

And if you need a 3D screen protector compatible with the fingerprint reader of the Samsung Galaxy S9 and S10:

what it is, how it is activated and how to use it to send files between nearby Android phones

Small, white and easy to wear, these wireless headphones called Airpods developed by Apple have been very successful since their release in 2016. They connect to iPhone, Apple Watch, Mac, iPad and Apple TV devices via Bluetooth. Originally designed for the devices of the Apple company, the Airpods are compatible with certain devices with an Android operating system. What are the different models of Airpods available and which versions of Android are they compatible with? How to use them? What features are lost when connected to non-Apple branded devices? We give you all the answers regarding the compatibility of Airpods to Android.

The different models of Airpods available

There are three models of Airpods available so far, the Airpod, Airpod 2 and Airpod Pro. The first released in 2016, and the last 2 developed in 2019 a few months apart.

Released in 2016, the first generation of Airpods has now given way to the new. Indeed, Apple stopped its marketing as soon as the Airpods 2 was released in 2019. Airpods do not have cables that connect them to the Apple device, they connect to the iPhone, iPad, etc. by Bluetooth, which allows you to listen to content without worrying about the distance (in the departments covered by Bluetooth). Airpods have 5 hours of battery life, simply recharge when stored in their protective case with a 24 hour battery of total autonomy. Equipped with Siri, they also allow call taking and remote playback commands.