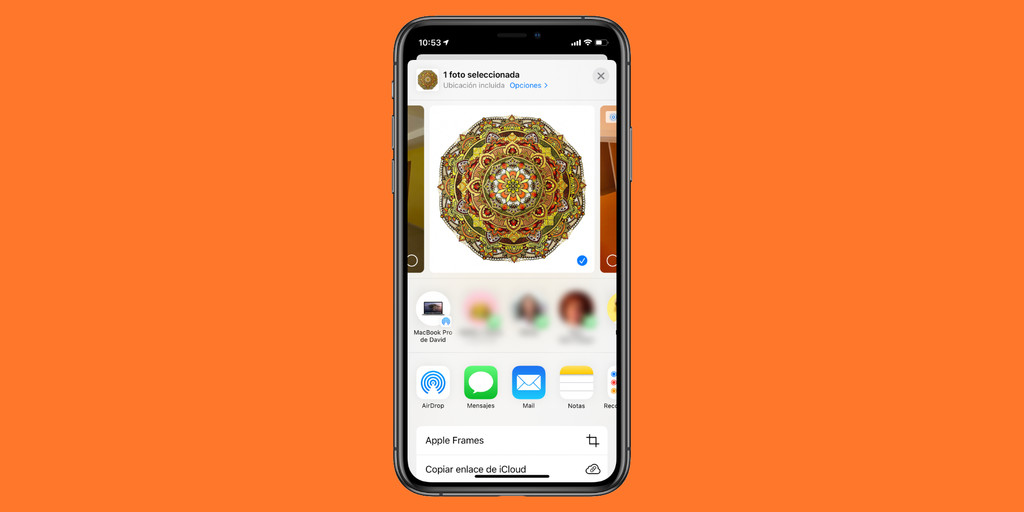 The iOS or iPadOS sharing menu brings together the different actions that we can perform with the selected content when we touch it. Symbolized by a square with an arrow upwards, this menu allows us from sending a photo by Messages to printing a PDF to sending a shortcut by Mail. We can customize the different actions according to our preferences, see how.

The sharing menu consists of three sections, are first the suggestions of Messages or AirDrop, then a bunch of applications with which we can share the content and finally the actions that we can perform, including shortcuts.

Of these three sections, we can customize the other two. the the different actions and applications that appear depend on the element that we shareFor the example of this article, we will customize the sharing menu of the Photos application. The steps, which we can then apply to any application, are:

Arrived here, we can customize various things. First, we can deactivate certain applications so that they do not appear in the menu. In addition, we can reorganize them so that we have the ones we use most at hand. The applications appear in two sections: Favorites and Suggestions. The idea is that we add to Favorites the applications we want, we order them as we want and, in addition, we hide from the section Suggestions the ones we don’t need. The steps are very simple:

So far we have customized the apps section of the share menu, we will now do the same with the actions section. The actions section displays a list of the different options we have for an element, in the case of Pictures for example, add to a shared album, duplicate, hide, etc. In addition also displays shortcuts for the Shortcuts app in which we have activated the Share menu option. Editing these actions is very simple, we will do so by following steps similar to those in the previous section:

An overview of the Apple Pencil on iPadOS 14: freehand drawing, refined shapes, selection and editing and data detector

And it’s as simple as that. In this simple way, we can customize two of the three sections of the sharing menu on our iPhone or iPad. So the actions or apps we use the most can appear in a more comfortable position and it will be faster and easier to use them.

How to change the sharing menu on our iPhone or iPad

Interview with Peter Molyneux: Why I Left Microsoft and Why My Next Game Will Change the World

The best new apps for iPhone in July 2020

Lightning cables certified to safely charge your iPhone or iPad

The best digital pens for iPad

Ninebot C30, an electric scooter with 35 km of autonomy which comes for 450 euros to change

IPhone SE vs Pixel 4a, affordable models face to face

This will be the new braided cable for the iPhone 12

How to change the voice with Voicemod for Android: create your video or audio clips

New iPhone at 100 euros: replacement of 1000 fake iPhone in the Apple Store

Superliminal analysis: like in real life, almost any problem can be solved if you change your point of view

How to transfer photos from iPhone to Android

Pixel 4a vs iPhone SE: this is the comparison between the most affordable models from Google and Apple

IPad continues to dominate the market, doubling sales to Samsung, second on the list

The public beta version of iOS 14 for iPhone is now available, how to download it