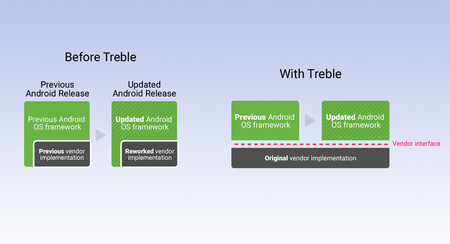 Android Oreo came with a change in Android architecture intended to make system updates easier: Project Treble. This change in architecture came with an interesting side effect: install Android versions the “easy” way with GSIs, or generic system images.

It’s been a few years since we first heard of Treble and while GSI images are still more of an experiment than the simple universal way, it is technically possible to use them to change the Android version or even install some select ROMs. We will explain below what is a GSI, what are the requirements to install them and how are they installed.

What is a GSI image

Lets start by the beginning. GSI stands for Generic System Image and its name is quite descriptive: they are generic system images, based on AOSP and without any kind of modification. That is, they are images of the AOSP system that are not intended for special hardware, but should be able to be installed on any recent Android mobile that meets the requirements that we will see in the next point.

GSI is a concept closely related to Treble, which involves a separation of the low-level implementation like the hardware drivers from the rest, so that new versions of the system only need to update the system without worrying about the support to review and update the drivers as well. GSI images take advantage of this separation, and can therefore be installed on different devices, hence the “generic” of their name.

In practice, GSIs They are mainly used in three ways. Google uses them during its terminal certification process to do different tests, developers can use them to be able to test their applications in future versions of Android without using an emulator or waiting for the official beta for the device and, moreover, lately the The ROM developer community is experimenting with releasing GSI versions of their ROMs, which are sometimes easier to install and more universal than traditional ones.

What do you need to install a GSI image

Project Treble and the GSIs try to facilitate the installation of a different version of the system than the one that comes on mobile, but this is still a delicate and complicated process. There are many moving parts and, although Google promised us that they were working on a way to simplify the matter, the truth is that in 2020 it is still a not too intuitive process: a mobile must meet various requirements to be able to flash a GSI.

To begin with, the mobile must have released with support for Project Treble out of the box. There are several ways to check this, from applications to using the adb shell getprop ro.treble.enabled command. If the result is false, the mobile is not supported. If the result is true, it is, although you should do an additional check to see the degree of compatibility.

The list of requirements is long and exhaustive, but it is important to make sure that the mobile is compatible before proceeding

After connect the mobile using ADB, you will need to type the command adb shell cat /system/etc/ld.config.version_API.txt | grep -A 20 “”, changing the version_API to the version the API number of the installed version. For example, in Android 10 you should change it to 29, and in Android 11 to 30. The result will be a torrent of information like the following:

Below the section you will need to look for the value of namespace.default.isolated. If true, the mobile is fully compatible with Treble and you can install any version of Android through a GSI. If it is not, you can still install GSI images on a Treble compatible mobile that meets the rest of the requirements, but it must be the same version of Android that is installed. For example, on a Samsung mobile with Android 10 and One UI, you could install an AOSP GSI with Android 10, but not the one for Android 11.

This is the most important requirement, although not the only one. The mobile needs have the bootloader unlocked. You can check if this is your case in several ways. As a general rule, if the OEM Unlock option appears in the developer options, it is possible to unlock it with the fastboot command fastboot oem unlock. On Xiaomi mobiles, you can use this method.

How to flash a GSI on a mobile with Treble

Ok, your phone is compatible with Treble and GSI, now what? First of all, remember that flashing the mobile can brick it, cause loop reboots or other problems. Do not do it unless you are familiar with this type of process and have experience recovering the mobile from similar compromised situations. If you have important data on your mobile, it is essential to make a complete backup.

Of course you will need download GSI image you want to install. You can find the official Google ones here, and it is important that you download the appropriate one for the architecture of your mobile. Some ROMs, like LineageOS, are experimenting with GSI as well.

Download the image to your PC, connect the mobile to the PC using a USB cable and restart the mobile in fastboot mode. The process varies from one mobile to another, but is generally achieved by turning on the mobile while holding down the volume up or down key and the power button. You can also do it with the ADB command adb reboot bootloader.

You will then need to use fastboot (you can download it from here, without having to download all of Android Studio) to carry out a series of necessary processes. The first of all is wipe system partition. It’s the point of no return: think twice before proceeding.

Before flashing the GSI image, you will need to run another command to disable verified startup, so that the new version of the operating system can boot. This requires flashing the vbmeta.img image, which is included in the GSI ZIP file downloaded from Google. To do it, you need to use this command:

At this point the only thing missing is final flashing of the GSI in question. The process is exactly the same as before, only changing the command to include the name of the image file that we have downloaded (for example, system.img) and the name of the system partition. This is the command:

If all goes well, the flashing process will begin and be ready in a few seconds. Then you can restart the mobile and hopefully start enjoying your GSI experiment. Keep in mind that the first start always takes more time than the successive ones.

Unfortunately, GSI flashing is still a complex, delicate and lengthy process, although we hope that Google will simplify the process in the future. If you have a problem with your mobile after doing it – for example, if it loops or does not start – the best solution is download the original firmware and flash it using flashboot, usually with the flash-all.bat file that automates the process.