Realme mobiles can be updated directly from the OTA notification, but also supports manual ‘flashing’ with an update file. And it’s often much faster to update this way, especially if you’re using an official and global Realme ROM.

In general, there is not a lot of work to update a smartphone because the update skips like a warning: just click on the notification and the process starts. This is called OTA or FOTA (Firmware Over The Air or wireless update), an automatic means used by manufacturers to update mobile firmware. Waiting is usually the key to receiving OTA, but there is always a shortcut to making the days shorter. As with Realme: it is possible to update your phones manually.

On the Realme support pages, the latest mobile firmwares distributed for each country are available. Therefore, and in most cases, if the OTA does not reach you over the phone you can download the firmware from the official website to install it later manually. It is a safe process that does not cause too much difficulty; as long as it is the specific Realme file to update and it has not been modified (the installer checks that the firmware is correct before ‘flashing’).

Manual installation is not done from the phone settings, like in other brands, but you have to go through the file manager to run the firmware directly. The process is as follows: 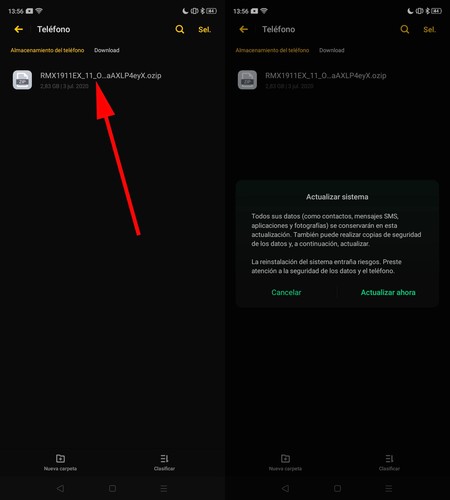 While looking for the firmware on the Realme website, it might not be available yet, as is the case with Android 10 with Realme UI for Realme 5. Global update started in June, but it has not yet reached Spain. And there is a way to speed up the process: download the firmware from the Realme India support page.

Realme India may have more updated phone firmware. They are global and include Spanish

International Realme models share hardware under the same name, but you have to be careful: Indian firmware may not be 100% compatible with other models, like the Spanish one. Usually there are only software differences (some specific Indian applications, shop and thematic application adapted…): You can flash an Indian update because it is part of the global mobiles. This, yes, always under your responsibility. Often times, OTA only takes a few days, so it’s worth the wait.

Android Auto: 17 tips and functions to use the application to adapt your mobile to driving

In the post-Olympic era, the photography market will never be the same (Clear X # 102)