QR codes are here to stay, as they are an easy way to transmit various data to any terminal that has a camera and an app to read it. In web browsers, it is increasingly common to include a QR code reader so that you can open websites directly, even though Google Chrome was reluctant to add it. After integrating it into your beta, you can now share websites using QR code with the stable version of Google Chrome.

The feature is available in the latest official version of Google Chrome, although it is not enabled by default, but you need to enable Chrome flags. With them, Chrome’s share menu can generate a QR code with a cuckoo dinosaur, in addition to scanning QR codes to open web pages.

Google Photos for Beginners: First Steps to Start Saving All Your Photos

The good news is that Google Chrome is finally including its own QR code reader. The bad news is that this QR code reader is not enabled by default: you should activate certain Chrome indicators, the name given to the experimental functions of this browser.

To do this you need to open chrome://flags in the browser and switch to Enabled (on) three different values, all related to the renewal of the share menu that Google plans for future versions of Chrome. They are as follows:

Mark these three experimental functions as activated and restart browser with the button below as soon as you modify one of these values.

After that, you are ready to share a webpage as a QR code directly from Google Chrome. The sharing process is the same as usual: using the Google Chrome menu and pressing Share.

What changes is that the menu that opens is personalized and not Android’s, showing tools like Screenshot, Copy link, Send to your devices and in the top bar. QR Code. You should play on the latter. 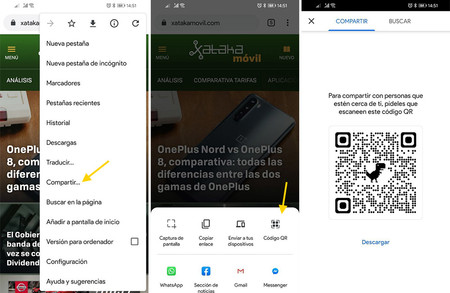 Google Chrome will then generate the QR code with the link to the webpage you currently have open. The code includes the Google Chrome dinosaur in the middle, and you can download large, in case you need to print. Also, from the tab Search Chrome’s built-in QR code scanner opens, with which you can read other dinosaur codes.

Xbox Series X: game upgrades to next gen should be free according to Microsoft

The best gaming headsets in 2018 for PC, PS4 and Xbox One

One day you will come back – review