Although they have gained a lot of traction in the gaming market, ultraportable monitors large diagonal have their main market niche in the professional and office markets.

At SamaGame we have tried the spectacular LG 49WL95C-W, a large diagonal, curved monitor that allows us to work envelopingly with the equivalent of two 27-inch screens with QHD resolution.

How to know if your mobile is playing Netflix, Disney + or Amazon Prime Video in maximum quality

Closer diagonally to a large living room television than to a work monitor, the LG 49WL95C-W is positioned in the market as the new reference model for those who need a panoramic workspace and in which to manage several screens at maximum resolution. It’s like having two 27-inch QHD screens.

The LG 49WL95C-W is a huge monitor that allows you to comfortably work with two full 27-inch screens using a single device.

This monitor has a diagonal of 49 inches with 5120 × 1440 pixel resolution and 32: 9 aspect ratio. Its objective is to offer a wide space without neglecting resolution, since the equivalent density is 106 ppp, enough to work comfortably.

After Velvet, LG is preparing a mobile with rotating screens, according to Korean media

In creative work associated with photography, graphic or video editing, having this diagonal is a delight, having everything at a glance.

For tasks like video or photo editing, the extra workspace is extremely useful

In a team of these dimensions and possibilities, connectivity is of special importance. This LG 49WL95C-W offers two HDMI 2.0 ports, a DisplayPort 1.4, four USB-A 3.0 ports and only one USB-C compatible with Displayport.

At this point we expected some more of this last type, especially since it allows us both the transmission of video / audio and powering the equipment. It is ideal because to use the laptop (if it has USB-C) as input element of the monitor, it is charged at the same time. And even if the laptop is connected via HDMI, we can use that USB-C port (up to 85 W) to charge it without having to carry its charger. Another detail is that a compatible cable comes in the box.

Although it only has one USB-C port, its compatibility with Displayport and charging make it the best ally to have fewer cables on the table

All ports except two of the USB-A ports are located at the rear. The two on the side have better direct access and the headphone port has been placed next to them. In any case, what is accessible is relative given the size of the monitor when we have it placed on the table. 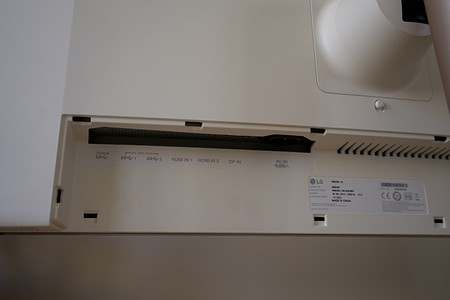 The same goes for monitor physical controls. They are accessible but not as comfortable as if they were on the front, something that is true that would break the exquisite design of this screen. In any case, both ports and controls will even be customary to be interacting with them all the time.

"Those who do not know mathematics will have a serious problem": the importance of mathematical skills in the world of work

The LG 49WL95C-W also includes integrated speakers. And very well disguised. They are two of 10 W but placed in the left half of the monitor, at its base, so although they are stereo, the surround feeling is not such in reality. 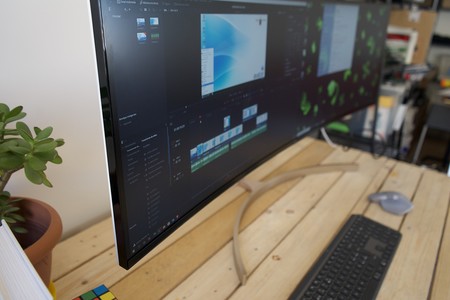 The monitor’s frames are very small, managing to reduce its visual impact while improving the “enveloping” feeling.

The LG 49WL95C-W monitor, despite occupying an immense amount of space on the table, offers us a very careful design and where we highlight the very reduced frames, which reinforces the enveloping sensation of the curvature of the screen. It is a design without fanfare and that supports the placement of the monitor in different environments.

The monitor ergonomics It is very wide, being able to modify and customize both the height and the inclination, in addition to admitting the lateral rotation of the same.

The base allows the modification of the height, inclination and even lateral rotation

To keep a screen of this size stable, the base is very wide. It has a curved shape but is very thin, which reduces the impact on the surface that makes it unusable around the monitor. It is elegant and effective (metal finish), although you can’t avoid some horizontal rocking when touching the monitor.

A level of control of the menu des foins that emphasizes that a joystick uses a system of type, simpler and more direct to operate than the row of buttons. So we can do it “A blind” quite successfully and quickly. And the menu, for what we usually find in montores, is simple, direct and sufficient. 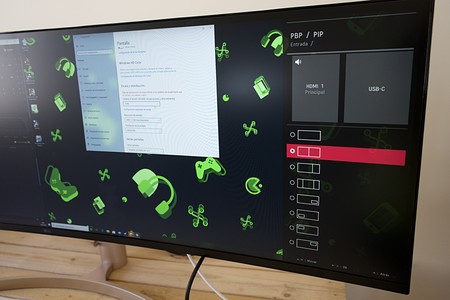 At the OSD level, this ultra-panoramic LG is the best we’ve seen on the market

Thinking of an available workspace equivalent to two screens opens up many possibilities when adjusting our workflow in multitasking plan. Here LG has not left the user alone and the technical possibilities of its ultra-wide panel are accompanied by a very intuitive monitor interface as well as the complement in the form of software for the multi-window management automatically. 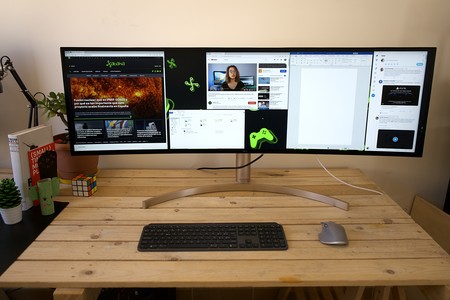 If we stick to the monitor, its strong point is that all the available space can be managed with up to three sources in a simple way. The most powerful is when we connect two computers and we can make use of the PBP system with multiple configurations, from a symmetrical cast to a central fountain and two lateral ones. Au total, together with the PiP mode, we have more than 7 possible multiscreen configurations.

In case we want to connect two PCs to this screen, the Dual Controller software allows us to use a single keyboard and mouse to control them, as well as drag and drop files between computers. We must previously configure the configuration by indicating the IP addresses of the two computers that we want to link.

These apps already have widgets for iOS 14 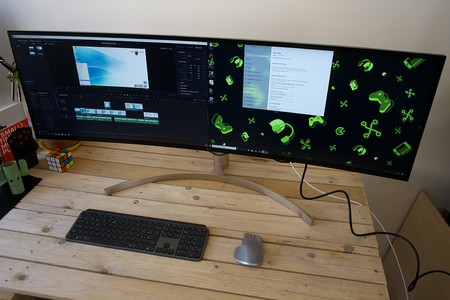 If we choose a single source, LG also has the program Screen control, which serves, in addition to managing some monitor parameters directly in the PC without going through the OSD menu on the screen, to use Screen Split.

This operating mode allows us to choose the monitor screen division type (both in the number and placement of the divisions and which windows will be placed in each area) and that these settings are applied automatically.

Buying an iPad for back to class: things to consider, models and recommendations 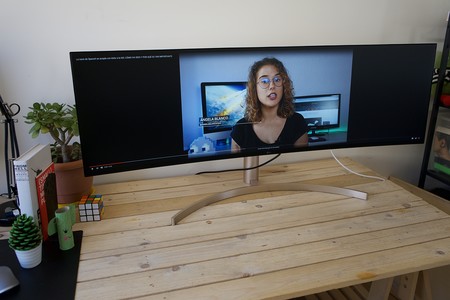 This is not a panel intended for image professionals who seek maximum fidelity and color coverage, but for other work areas its characteristics and behavior in our test is of a high level. As much shine as color reproduction and contrast offer a very satisfying experience at the level of image quality.

The panel includes a very effective anti-reflection treatment and that facilitates visibility in difficult environments. And we also have great help in the form of brightness sensor to adjust the brightness automatically that can act by zones, something logical in a panel that covers so much space.

Xiaomi Mi NoteBook 14: a lightweight laptop with an aluminum body and a 10th generation Intel processor for less than 500 euros

Eat possible modes of use We have Live, HDR, Reader, Cinema and Special Colors, in addition to the one that comes by default and is the most faithful of all. We can also adjust the brightness level (or leave it as automatic), contrast, sharpness, gamma and color temperature, both warm, cool and medium modes as well as fully custom. Also the response time supports configuration by the user. 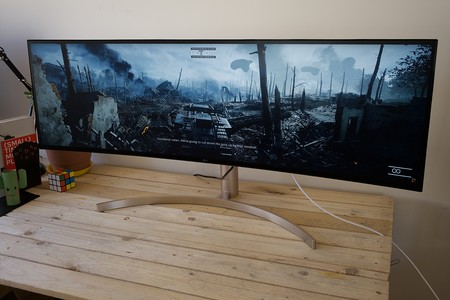 One consideration: if due to its appearance, curvature and size, you have thought of this LG 49WL95C-W as a device for multimedia playback or pure entertainment, it is not the best option, at least if we want to take advantage of its entire surface. Adapting non-native content to this very panoramic format leaves us with a good black margin on both sides. Another thing is that we want to use it by dividing the screen.

We are not facing a monitor specifically designed for gaming. Its refresh rate stays at 60 Hz and non-foin timing technology. Response time is 5 ms. 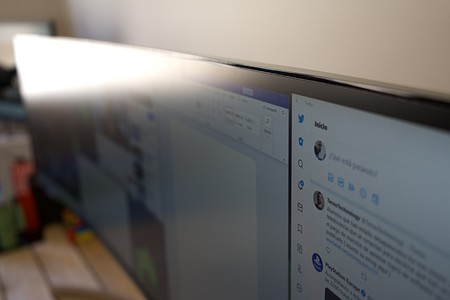 Another song is sound. Your system is made up of two 10W speakers that offer a powerful and sufficiently clear sound for the non-purely multimedia use that we may give you. The integration of these speakers is sufficient and well thought out to avoid having to include other elements in a work table already quite saturated by the dimensions of this monitor.

Spectacular from the assembly, for which it is advisable to have help, to the sensation of immersion with native 32: 9 content. This is the ultrapanorámico monitor LG 49WL95C-W, a model that has a high price but that meets the conditions of both panel quality and possibilities for jobs where multitasking or having as much space as possible is a must.

Xiaomi Mi NoteBook 14: a lightweight laptop with an aluminum body and a 10th generation Intel processor for less than 500 euros

To use it you need a good workspace as well as a source that can take advantage of it. But if the color coverage it offers and its possibilities with multiple sources convince you, this monitor of LG answers just what is asked of it: image quality, work possibilities and a final magazine configuration.

On the third floor there is an irreplaceable hole | Society

Articles | Minecraft Dungeons review. Neither mine, nor crafts, nor dungeons

Minecraft dungeons: how an idea for 3DS became a modern dungeon robot

How cult publisher MicroProse wants to build on its past successes

Control review – Everything under control