A flat tire and goodbye to the trip. Everything has a solution (and not to say the Russians), but ideally, car tires should be safe from these problems. Fortunately, manufacturers like Michelin, Continental and Goodyear are already thinking about the future and in recent years, they have been anticipating what projects they are working on.

These are ideas, prototypes and concepts. Most of them will not be built although there is still hope. Some will serve as the basis for other tires and there is even one that they have promised their commercial launch.

We always talk about autonomous, electric and connected cars, but the automotive and road world is also working on tires. We leave you here with ten projects, ten futuristic-style prototypes that just happen to reinvent the wheel.

We start with one of the most ambitious projects. NASA presented its super elastic airless tire at the end of 2017, thought for future missions on Mars and in metal.

It is inspired by the wheels used during the Apollo missions and the main change is the use of a shape-memory titanium-nickel alloy mesh. In other words, a great elasticity to deform. In addition, the tire is capable of withstand high temperatures and does not require air for the internal chamber, because inside it is hollow. At the moment, the manufacturing cost is too high and makes it commercially impractical. 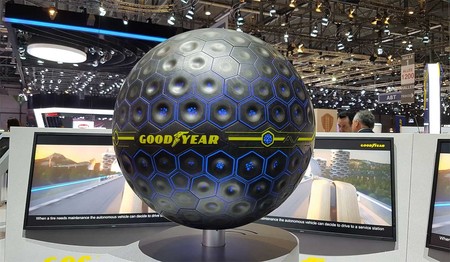 The Eagle 360 ​​was one of the first prototypes that the Goodyear brand showed us at the Geneva International Motor Show. It was in 2016, when many brands began to imagine what the tire of the future would look like. A year later, the Eagle 360 ​​Urban arrived. An evolution that has retained the spherical shape but where two very fashionable buzzwords have been added: artificial intelligence and connectivity.

What do these technologies paint on a wheel? The idea of ​​Goodyear is to put a “brain” on its spherical tire so that it is the tire itself. learn from the field and “decide” how to adapt to the driving or the environment. The tire material would be flexible and able to contract and expand to vary its surface area depending on the areas (“dimples” for wet, flat for dry, etc.). In the event of a puncture, the tire could self-repair through the use of sensors in the tread capable of detecting what is happening.

Oxygen, the wheel that generates oxygen 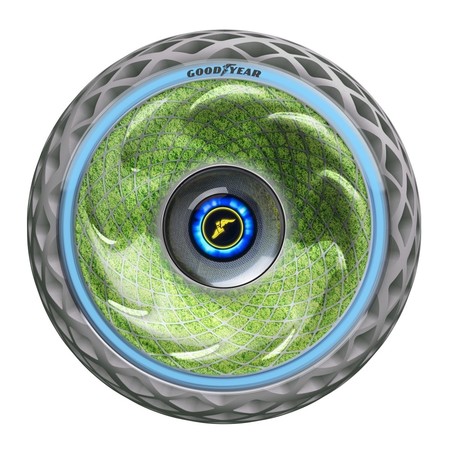 The second Goodyear prototype was presented at the 2018 Geneva Motor Show and is even more special than the previous one. It’s a tire lined with foam to generate, according to the manufacturer, oxygen while driving. The goal is not to fix punctures or improve fit. This tire built by 3D printing would use recycled rubber, it would be lighter to absorb shocks but its main feature would be the ability to release oxygen while driving and reduce CO2 from the air.

The idea is that the foam inside the wheels would absorb moisture from the road, enough to photosynthesize and therefore generate electricity. The one that would be enough to power the internal electronic components of the car. This is clearly a project in a very early phase that is difficult to market, although the debate proposed by Goodyear is interesting. Especially to think about how much the components of the car could be optimized to reduce the carbon footprint.

Uptis, the airless tire that promises to be marketed

Despite being a prototype for the moment, Michelin and General Motors announced in June 2019 that their Uptis (“Unique Puncture Proof Tire System”) tire will be marketed. from 2024. Airless tires are not an impossible project. Brands like Toyota have already announced their interest in this technology and Michelin explain that it is an investment of more than 40 million euros.

Uptis will be a tire tested in a fleet of Chevrolet Bolt EVs and its main characteristics are that by removing the air, the risk of punctures is also eliminated. The objective is to offer a wheel that ultimately offers a better durability than current ones. Resin tire inserted in carbon fiber, repairable by 3D printing and without rims.

Hankook and the expanding and contracting wheel

Hankook is another company that presented us with different tire projects for the future. In this case, we are faced with quite futuristic visions that would serve not only the car, but other urban mobility solutions. “Flexup” is a single-acting tire whose main characteristic is that it could expand and contract to adapt to the surface. Imagine the wheel climb stairs with a shape, then smooth as you move flat.

Their creations do not stop there, since the brand recently presented three concepts at the IF Design Awards. The first of these is the “Hexonic”, a tire with sensors designed for self-driving cars. The second is the “Kinergy 4S 2”, a more traditional wheel with a V-shaped pattern that adapts to both extreme heat conditions and the snowiest winter. The third of these is the “HLS-23”, a tire through which we can recharge the car. 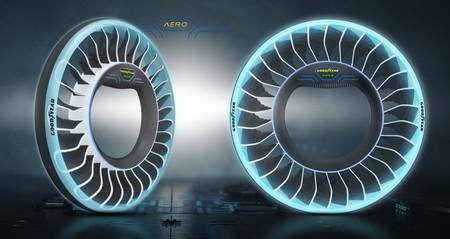 Goodyear is the most active brand to see the possibilities of tires and it is probably the furthest from the current ones. The Goodyear Aero is a prototype tire designed for flying cars. It could act like a traditional tire but would have a Tilting rotor capable of absorbing forces, turning and assisting in lifting the vehicle. High wheel speeds would be achieved with a magnetic force capable of propelling the vehicle without friction.

What is the point of such a tire? Especially when there are so many years of seeing flying cars, if they ever appear. The brand’s response is that it helps them identify possible problems related to new driving styles. 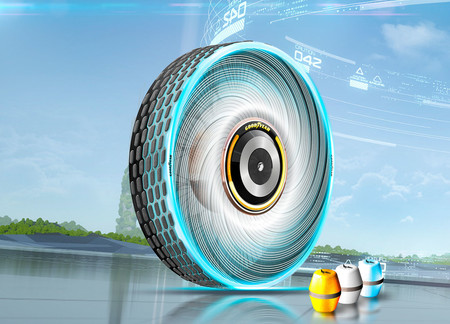 The prototype tire that is replaced by capsules and reinforced with spider silk. This is the Goodyear reCharge, presented in March 2020. The idea is based on personalization, durability and simplicity. The company does not forget to integrate artificial intelligence to create a personalized profile that would adapt to the conditions.

Continental and its variable pressure tires 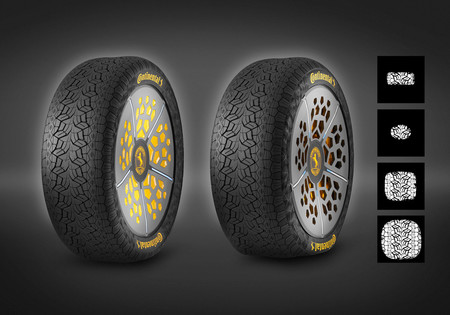 Another tire brand such as Continental also signed up years ago to show us two specific wheel designs that they were planning for the future. The first of these was ContiSense, a “sensitive” tire capable of transferring information through its outer casing through the use of sensors installed in the rubber itself. With its own software developed by Continental itself, the objective was to see whether to recognize the condition of the road or create alerts as soon as a foreign object has damaged the structure.

The second of these is ContiAdapt, a wheel with microcompressors They help to regulate the air pressure inside. The idea is to be able to adapt to four different settings: wet ground, uneven areas, slippery or normal terrain. 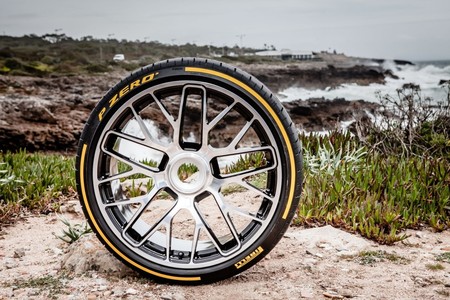 There is a keyword that they had not yet integrated into a tire: the 5G. In November 2019, Pirelli presented its “Cyber ​​Tires”, the first to have this connection and ready to enter the market, according to the company. The tires have a sensor to monitor the condition of air pressure, tread depth, temperature, acceleration along the longitudinal, lateral and rotational axes, up to the ability to detect water and ice on the road. Thanks to the 5G connection, these tires could connect to other vehicles with the same wheels.

Bridgestone was one of the first brands to introduce an airless tire concept. In 2013, he revealed details of the second generation of his ultralight, tubeless tire. designed for bicycles and light vehicles. Without the need to inflate, airless tires are always under tension. In addition, according to Bridgestone, C02 emissions are also reduced.

There are already airless wheels, like Enduro foams. The next step is to ensure that the wheel is also integrated into the rim itself to achieve a tire with lower weight, greater durability and no punctures. A promise that wheel manufacturers have been showing us for years and we just need to know when they will be available for purchase. If one day they become popular.

CHANGE: A Survival Experience for the Homeless: Overview

Huawei MatePad: a cheaper edition of its 10.4-inch tablet designed for students