In October of last year, Microsoft introduced Windows 10X, with the aim of running this operating system on flexible screens or dual-screen devices. This ambitious idea will however be refocused, the company specifies that Windows 10X will debut on normal single-screen laptops.

In an official statement released by Panos Panay, head of Microsoft’s Windows and Devices division, they announced the change in approach to Windows 10X. The executive says “the world is a very different place than it was last October,” implying that users are using cloud services a lot more than before due to isolation. Since Windows 10X is a system with a tendency for cloud and online services to have more flexibility, they will prioritize the arrival of Windows 10X. How? ‘Or’ What? ‘Or what? Dual screen devices will still take a long time, so Windows 10X will soon be available for single screen laptops.

OkunoKa Madness is the Super Meat Boy with gorgeous graphics he needed, but he still needs to polish his gameplay

There are no details on when Windows 10X will officially arrive in laptops, or which of them. Fewer dates for dual-screen devices that Windows 10X was designed for. According to Panos Panay:

“We will continue to look for the right time, with our OEM partners, to bring dual screen devices to market.”

A simpler version of Windows for laptops

Windows 10X includes for example being able to use a virtual trackpad it adapts to the context of each application and only appears when invoked. Something similar is happening with the Wonder Bar, which we’ve seen in more detail and designed similarly to the Touch Bar on Apple’s MacBook Pro by adding pop-up buttons to the app being used. 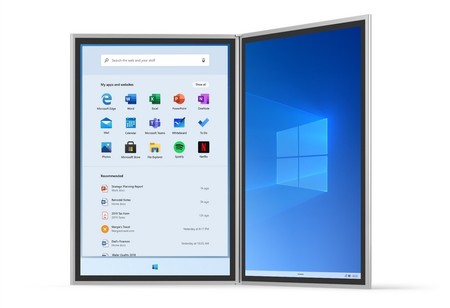 The main news we see in Windows 10X compared to Windows 10 has to do with the idea of ​​placing more information and better distribution using the two screens. It is also designed to run two apps simultaneously on two screens and, for example, to be able to drag and drop elements from one to another while changing the screen. So it will be curious to see what you focus on on “normal” laptops where there is only one screen.

Essentially Windows 10X is a more streamlined version of Windows 10 when it comes to the interface, so it seems logical that it works on laptops or devices with less screen / power than a desktop. However, it is unclear what its advantages will be over Windows 10 on computers that run the latter without any issues. Nor which version Microsoft will have in each type of device. We will see if in Build 2020 which will take place soon, other doubts will be clarified.

Next iPhone SE could still be 5G-free when it launches in 2021, analyst says

Coronavirus: The government will meet in two weeks the scientists who demand an external audit | Science

25 words to judge the former presidents of Mexico

Construction Eagles: The story of the victory over the “Vertigo-Free” Indians who raised the skyscrapers of New York | ICON design

The Boijmans van Beinungen in Rotterdam: the museum that leaves nothing to the imagination | Culture

The government will allocate 76.4 million euros to protect the cultural sector | Culture