The “app or platform battle” between China and India continues. A few days ago, the TikTok rating on Google Play went from 4.5 to 1.2 stars and Google ended up removing it from its selection of publishers. The reason? Nail joint action of thousands of users in India, who, under the hashtags #bantiktok and #tiktokbanindia, called for TikTok to be banned for plagiarizing YouTube content and allegedly promoting attacks on women.

Now, as anti-Chinese sentiment continues to grow in India due to both border disputes and the coronavirus controversy, a new app has emerged on Google Play that aims to identify Chinese apps you have installed on the phone so that you can delete them. At the moment, it is only available for users in India, but it gets great download success.

« Supprimer China Apps » (“Suppress China’s requests”, in Spanish) is an Android app that aims to identify the origin of the apps that Indian users have installed on their Android phones so that if they wish, they can be uninstalled. As its developers explain in the description of the application that appears on Google Play:

This app is developed for educational purposes only to identify the country of origin of a certain app, we do not encourage or force users to uninstall none of the apps.

In addition, they add that country of origin detection is based on market research, but they do not guarantee that the information is correct or incorrect, “so users should only act as they wish.” And they insist that it is an educational category app, which is not used for commercial purposes.

Anyway, the truth is that according to 91mobiles, the app is only 3.5MB in size and has a very simple interface where you just need to touch the “Scan” button to start scanning the apps installed on it. the phone. link. Once you have identified those of Chinese origin, shows them on the screen next to a trash can icon which allows the user to easily uninstall them. Of course, you can only delete Chinese apps that have been downloaded, not those that have been preinstalled (bloatware). 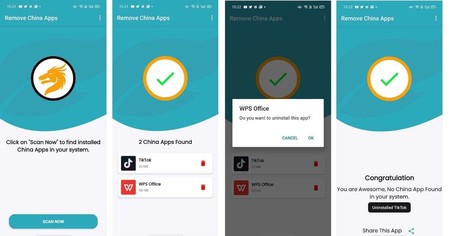 ‘Remove China Apps’ is only available for users in India, but there it has already gone viral and has been placed on best places in the most downloaded free apps Google Play with an average rating of 4.8 out of 5. Indeed, since its launch on May 17, it has already exceeded one million downloads.

The 10 craziest and rarest iPhone accessories sold on AliExpress

The new Nintendo game is killing me … |

Types of videos that can be useful when launching a business

Configure Macs with Apple Silicon: from several processors like Intel to simplify the range |