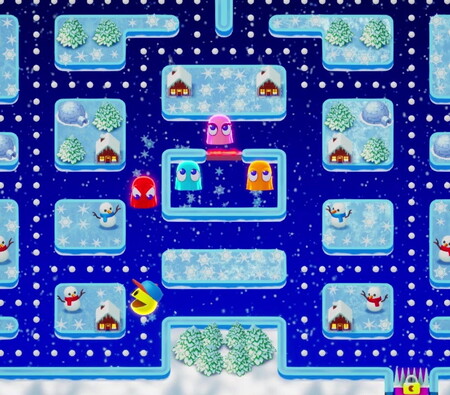 review with price, trailer and game experience for Google Stadia

There are tests before which you know perfectly well that the final product will convince you, because they show you everything that it is capable of. It’s just what happened to me with Pac-man Mega Tunnel Battle, which convinced me with its demo.

For those who do not remember, it is the new game of the mythical Pac-man for its 40th anniversarySeeing how this time Bandai Namco has fully committed to Battle Royale, we must not forget that a decade ago the Japanese company launched Pac-man Battle Royale, an arcade game that was not exactly a Battle Royale. Luckily for now (Pac-man Mega Tunnel Battle) Yes it is.

All games confirmed for Google Stadia

A battle against ghosts … and 63 Pac-mans

Both Bandai Namco and the studio that developed it, Heavy Iron Studios, have been completely right by not modifying the formula of this icon that emerged in 1980. It follows the same layout for the boards, followed by the ghosts Blinky, Pinky, Inky and Clyde and follow the mechanism to “pass” the phase. But it has evolved.

For example, we have a slight uptick in speed when cornering, as we saw in the addictive Pac-man Championship DX, having, in turn, two types of escape tunnels at the ends of each screen. The standard tunnel takes us to the opposite end of the same screen, while the lock tunnel, which has a reload time until its doors open, will take us to another player’s screen. And therein lies a good part of its grace.

Google Stadia is the best of the PC and console in one, says indie creator

And it is that as soon as those seconds of rigor pass, we can invade the other players at will, either to add more points on your board or to give them a sack and eat them … as long as we have swallowed a Pac-ball first.

With this larger “coconut” we will not only be able to swallow the ghosts, which will turn blue and try to escape from our presence, but we will also get bigger and we will be able to eat other players, as long as they have not eaten another Pac- ball, otherwise we will bounce.

It goes without saying that good brawls are mounted when several people get together, although with 64 boards, it is difficult for more than three to get together on the same screen. And unless they last more than 30 seconds in that area, that the ghosts do not stop and the Pac-balls are scarce until one gobbles all the “coconuts” to go to the next phase and changes the layout of the labyrinth, resetting our position, creating more “coconuts” and Pac-balls and let the ghosts come out.

It’s like playing the classic of a lifetime, but with the tension of not knowing when they will be able to invade us, because the doors open and close every so often (or we can force them through a power-up, in addition). And on many occasions it is also interesting to invade, such as to avoid a ghost on our screen (they will not be able to pass through that type of tunnel in particular), although it will be necessary to pay attention to the edges of the rest of the screens, showing what’s going on out there, that going crazy can have devastating consequences.

Over 50% of UK console players interested in Google Stadia

Pac-man Mega Tunnel Battle It arrives in full fever for the Battle Royale for stars of yesteryear, such as Tetris 99, Worms Rumble or even Age of Empires II, as well as the social concepts for exclusively online games. Since here, if all our lives are killed (we start with three, but we can get more during a game), we become spectators and we can vote every few seconds the power-up (one of them, bad) that the others will have.

It is more enjoyable, logically, either by going to our ball, staying on our screen (with customizable design, in case we go from the style of the 1980 classic and prefer a Christmas theme, summer, etc.), or invading the rest of the players, but It is not bad either to stay and see how others play, zooming in to see how many are left. The effect is very cool.

Android TV will have integration for Google Stadia in 2020

More content is missing, on the other hand, by having a single game mode, Elimination. There are challenges to unlock to give it more life, while we earn more coins (all cosmetic items are bought with the money we get through challenges or simply by playing), but a greater variety of both cosmetic items and game modes is missing. game.

Despite having a very good connection, in this final version I have experienced some lag when it comes to seeing the rest of the players, watching how they teleported a few meters, as if it were a glitch. And even at times the game has not gone so fine when I took a turn, with the consequent death of my Pac-man.

Google Stadia review – It arrived in Portugal today, but is it worth it?

They are the aspects that prevent it from shining more strongly, as well as the pounding that is the remix of the mythical melody of the 1980 classic, but that does not make such a dent in the final result, being a very fun hobby as soon as we like it the most iconic pacifier in video games, which never bores.

In addition, there are very interesting challenges within his achievements for Stadia, such as cleaning the screen of an opponent without being stepped on, or the game that gives the multiple power-ups, with one in particular that the number of ghosts on the same screen will increase. There’s even a ghost magnet … and ghost repellent, mind you.

Ask anything you want about Google Stadia

In short, a interesting alternative to the mythical Pac-man. We are facing a Battle Royale that is allowed to play whether we go to our ball or if we get aggressive against the rest of the players. However, hopefully Pac-man Mega Tunnel Battle receives more content to make it more proficient.

Google Stadia will not arrive in Portugal in 2019