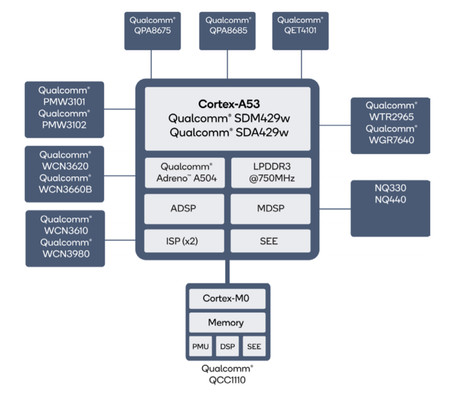 The Snapdragon Wear 4100+ is based on Snapdragon Wear 3100 hybrid architectureIn other words, it has a fast SoC and an Always On coprocessor, but it jumps to 12 nanometers. It is true that in smartphones, we are already opting for the seven nanometers and that the five nanometers are on our doorstep, but this is quite an evolution compared to the previous generation, which was built at 28 nanometers.

That said, we start by reviewing its components. The Snapdragon Wear 4100+ is built on a 12 nanometer process and consists of four ARM Cortex A53 cores at 1.7 Ghz “optimized for wearables”. The main processor can be an SMD529W or SDA429W, while the coprocessor will be a QCC1110.

AMD is looking to the future with optimism, and the numbers support it, but Intel is still a long way off in the global x86 processor market. 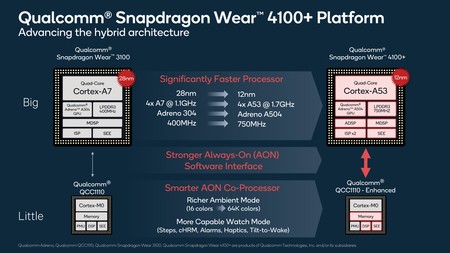 This secondary processor will be responsible for delivering Always On experiences, such as ambient mode, sports modes, and traditional watch mode. It can operate on its own when tasks do not require raw power from the main processor. This was already done by its predecessor, but there are important changes: instead of being able to represent only 16 colors in ambient mode, can now display 64,000; It has digital kerning to improve the visibility of these, it can display maps and update steps and heart rate in ambient mode, among others.

RAM has also been improved, it’s now 750 MHz LPDDR3 instead of 400 Mhz; and the GPU, which happens to be the Adreno 504A instead of the Adreno 304. Also new in the ISP, which becomes dual and supports cameras up to 16 megapixels. How does all this translate? Compared to the Snapdragon Wear 3100, 85% faster processor and memory speeds, a 2.5 times faster GPU and a camera with twice the resolution, according to the manufacturer. 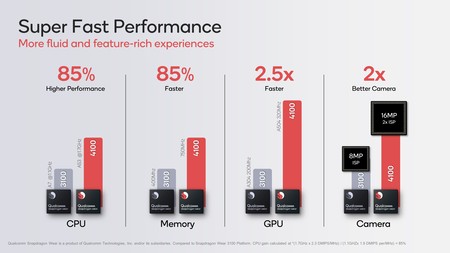 Performance improvements, according to Qualcomm.

Qualcomm also claims to have improved energy efficiency, offering dynamic clock speeds, voltage scaling, low-power geolocation support and an “improved Bluetooth 5.0 architecture”. All of this, says American society, result in a 25% reduction in energy consumption compared to the previous generation.

In terms of connectivity, the Snapragon Wear 4100+ integrates up to Bluetooth 5.0, WiFi in the 2.4 GHz band, NFC, GPS (GPS, Glonass, Beidou, Galileo) and the X5 LTE modem. This will allow manufacturers to opt provides global Cat 4/3/1 LTE connection in two or one antenna configurations. 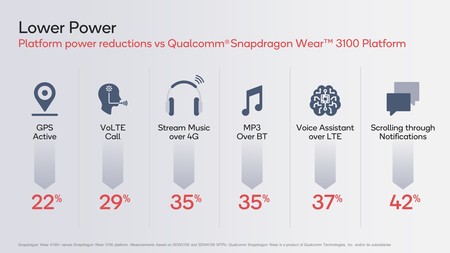 And speaking of manufacturers, Qualcomm took the opportunity to announce that imoo and Mobvoi (the company in charge of TicWatch) will be the first to bet on the Snapdragon Wear 4100 platform in a series of products that will see the light in the end. imoo will launch the Z6 Ultra within 30 days, while Mobvoi will deploy the latest version of Qualcomm in the new Tic Watch Pro.

Smartwatches that were ahead of their time: how were Casios that already had video games in the 80s

Wonderful 101 is a welcome remaster, but performance deceives – article

The new iPad Pro, with A14X processor, mini-LED screen and 5G, will arrive in early 2021

Search for extraterrestrial life by robots: NASA improves the decision-making capacity of its systems

Black Shark 3S: more memory, even with Snapdragon 865 and with control of games from the computer

Do you want to wear unique AirPods Pro? Do not miss this proposition

AMD is looking to the future with optimism, and the numbers support it, but Intel is still a long way off in the global x86 processor market.

Snapdragon 768G, the new Qualcomm processor comes with 5G and promises up to 15% more speed than the Snapdragon 765G

Hublot Big Bang E, a smart watch with Wear OS built in titanium or ceramic (and with a starting price of 5100 euros)

Samsung Galaxy A21s: the mid-range debuts with the Exynos 850 processor and develops in battery up to 5000 mAh

Vivo iQOO Z1: the flagship product with 144 Hz and 5G screen that debuts with the most advanced MediaTek processor

Virgin Telco arrives in Spain: these are the prices with which Euskaltel makes the jump on the national market

Pokémon Go improves its augmented reality: Pokémon can be “hidden” behind real objects

HiSense F50: Neither MediaTek nor Qualcomm, this mid-range launch the Unisoc 5G processor

OPPO Find X2 Neo: the new OPPO 5G proposal arrives with the Snapdragon 765G and four rear lenses on board

The OnePlus 8T and 8T Pro will arrive in October with the Snapdragon 865+, according to HDBlog

The Samsung Galaxy Note 20 would come with a new Exynos 992: mid-season processor renewal

Fashionable oximeters in the middle of COVID-19: which are (and which are not) those of smartwatches and bracelets