In today’s video games, there is complete dominance between EA and Konami for those seeking the closest experience to the world of football, while SEGA takes the palm of the coach simulators. But is there not arcades?

They are seen drip, but none end up leaving land with which they can stay in the market. And we’ll have to see how the move goes for Captain Tsubasa. Meanwhile we have the newcomer Super Soccer Blast from the Unfinished Pixel studio, dedicated to the much more relaxed style of football.

It’s not so easy to reproduce the classics of yesteryear

This is not the first time that creators of Spy Chameleon bet on a less serious touch of a sport: here they are Super Volley Blast (2018) and Super Tennis Blast (2019). And in this case, two of the most obvious references are the classics Dino Dini kicks off and Sensible Soccer by Jon Hare, two greats of the 20th century.

When I saw the launch trailer for this Super Soccer Blast A thrill went through me, as it seemed to perfectly replicate what those games meant between the ’80s and’ 90s. This style of play is fast and straightforward, but difficult to master against another rival who knew the same tricks. A style eminently Arcadien and fast digestion, to play fast games until you waste time. And he almost succeeded without the mistakes.

Honoring the color of the grass, it shows a bit of green in some facets of the game, like the artificial intelligence of the goalkeepers, who are a real strainer and don’t even know how to get out because of a split ball, or how much it sometimes delineates out of band. I even have to see teleports!

On the other hand, it doesn’t only help when faced with a style game Arcadien ball control is not that fast, very complicated tiki-taka because of the entanglement of the players with the animations. Of course, once the ball is in their feet, they won’t release it until the rival enters. And it’s hard for us to beep. In addition, there is no card or possibility to replace players. For not having, has no repetitions, something that collides a lot in a football game. 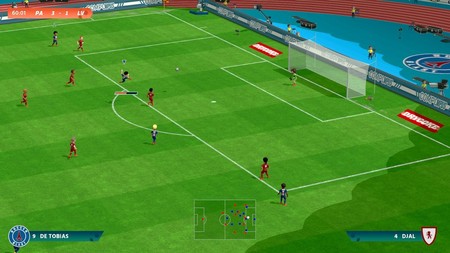 Save a rude reaction, the truth is that he lets himself be played and we will not take the time to discover its tips. Yes, those goals are practically assured, like the crosses towards the attacker located at the edge of the zone: no matter where the shot is aimed, it will be a goal if you anticipate the defense when it comes to jumping. And shortly after our training, he will be our wild card.

It’s a game with few buttons, but who cares to follow the PES or FIFA shot hassle-free. Then we have a normal pass, step aside for our partner to pass in the race or in the middle. And already different ways of stealing the ball, with more or less aggressiveness. Moreover, without worrying about the fatigue of the players, it doesn’t matter how much we run. And with an anecdotal “dribble”.

Logically, it doesn’t have an official license and all teams vary the name of their players, just like the recent Sociable Soccer did with their Macci, Ronelbo and Naymal Jl. To showcase the character designs, with a few pretty successful cartoons and having editor for men and women, in case we miss someone… but without touching those who are already there. And yes, we can also create entire teams and our personalized competition.

For the rest, it is pretty sparse in terms of options, with only five cups / leagues between clubs and teams. Sensitive World of Soccer has done wonders on this and Super Soccer Blast seems to be just a fan. But with some stands that far exceed those of LaLiga Santander. Seeing is believing…

Finally, Super Soccer Blast is not the eighth wonder like but can you tell us another one fun and simple football afternoon, especially if (like me) we miss more games with a more relaxed side.

Poimo, an inflatable electric bike that can be stored in a backpack

PlayStation 5: Sony to unveil launch games for its next console on June 4