We have heard a lot about the iPhone 12. If the rumors are not wrong, this year the entire batch will be made up of four devices, all of them 5G, to which we must add the recently introduced iPhone SE (2020). Its design, so far, was unknown, but Max Weinbach, editor of XDA and in charge of filtering the Samsung Galaxy S20, claims to have done with some renderings in CDA that show the supposed design of the iPhone 12 Pro Max, the largest model of those to come.

These renders have been published on the EverythingApplePro channel, which, based on the CAD files, has designed the first images of the terminal. Apparently, these renders, which date from January, are 70% finished, so we are not talking about a totally final design, but that does give clues about what could be to come. Be that as it may, it is still a leak, so better take it with tweezers, although Ice Universe claims that they are real and that, indeed, the terminal will be like that.

A similar design, but not so much

What we can see in the images is consistent with what has been recently leaked. If the leaks are not wrong, Apple would have chosen to abandon the curved edges to implement some straighter, metallic edges, similar to those of the iPad Pro and those that we already saw in the original iPhone 5, 5S and SE.

If this is the real design of the iPhone 12 Pro Max, then its chin is only 2.3mm, which will be a nightmare for all Android phones. pic.twitter.com/Q01sjwblFg

Reviewing the back, we continue to see a photographic module similar to that of the iPhone 11 Pro, although something bigger. It is something that, in a way, makes sense, since it is expected that next to the three lenses a LiDAR scanner like the one we have seen in the new iPad Pro will be implemented.

On the other hand, the renders show a kind of connector on the right edge. This is something that we have seen in the iPad Pro and that is used to connect accessories, such as keyboard covers. What it will be used for in the iPhone 12 is not known, but as we said, the renders are not finished, so it is possible that it will not finally make an appearance. Charging port is still Lightning, so, at least for the moment, no USB Type-C.

The iPhone SE (2020) lowered to 443.89 euros at AliExpress Plaza is a great deal for Apple’s new small smartphone 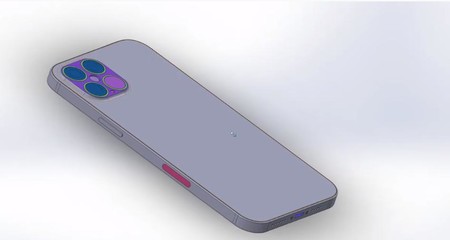 Speaking of reducing things, the renders show that Apple has cut the side and top frames by almost two millimeters, thus elongating the panel to the edges of the device. But without a doubt, the most striking thing is in the notch, which after several generations conserving the same size, it seems that it will eventually shrink to make it smaller. Not too much, but it is a notable change considering the notch of the iPhone 11.

As we pointed out previously, this is still one more leak. If everything goes as before, we will have to wait until September to see the terminal for ourselves. In recent months, analysts have pointed out that the iPhone 12 could suffer delays due to the coronavirus crisis

The 256 GB iPhone 11 reaches its historic low price on Amazon of 760 euros, with headphones and charger