SamaGame > WhatsApp > WhatsApp Web will have calls and video calls soon, according to WaBetaInfo 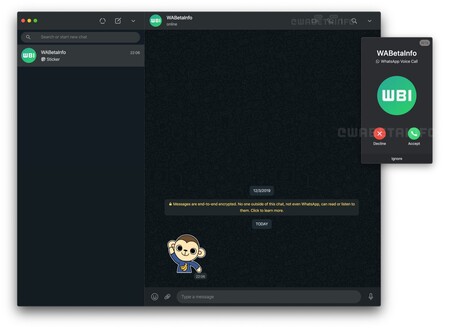 WhatsApp Web will have calls and video calls soon, according to WaBetaInfo

Two of the most basic functions of WhatsApp today are still not available from WhatsApp Web and WhatsApp Desktop, and they are voice calls and video calls. However, as they have discovered in WaBetaInfo, this is going to change in no time.

From WhatsApp they are working on bringing to the web client the function of calling with audio only voice and audios, although due to the screenshots they have shown, it would arrive in beta version. Calls is a field in which WhatsApp has not stopped working during the pandemic, since they significantly increased the maximum number of participants from four to eight.

A long-awaited function in times of telecommuting

Maybe a function like this was not sorely missed before the pandemic, as in general few people used WhatsApp calls compared to what was written in text. However, now video calls have grown enormously on WhatsApp even in work environments. When we talked to officials about telecommuting, they told us that for convenience they turned to WhatsApp groups for calls, instead of using corporate tools like Microsoft Teams.

In WaBetaInfo they have been able to activate the beta function of WhatsApp Web, and have shown the interface of incoming call and outgoing call. Something important is that they affirm that in what they have been able to experience there are video calls and group calls. Namely, that communication from the desk will not be limited to one person per call.

We will have to wait to see if these functions, in case, reach the desktop version of WhatsApp, which as we know is not only WhatsApp Web, but WhatsApp Desktop, available in macOS and Windows 10. In this article we point out their differences and advantages to use one over the other. Before, yes, we wait for the long-awaited multi-device function.