Could it be because of its realistic approach?

In ‘Primer’ the discovery of time travel is not made on purpose, but as a collateral effect of an investigation to lighten gravity in objects. Come on, something similar to the discovery of Teflon, the microwave oven or the saccharin with which I deceive myself in the morning that I am still on a diet.

But beware, realism doesn’t end here. Because time travel is not something instantaneous, as we have seen in hundreds of audiovisual or literary works, but it occurs at the same rate as normal time.

Let me explain: in the ‘Primer’ machine, to travel six hours to the past, you have to stay six hours inside. And given its argon atmosphere, the protagonists cannot breathe inside, hence they have to provide themselves with oxygen bottles for the trip.

Plans on plans, obvious or hidden, past and future

In a work of fiction that talks about time travel, as a rule, the argument is not usually difficult to follow for one reason: Although the date of the story is balanced forward or backward in time, a person’s experience is followed or intuited in a linear way.

Up to a certain part of the film, ‘Primer’ may seem the same as the others because Abe and Aaron’s first trips are uncomplicated. They turn on the machine, leave, isolate themselves, go back to the machine, and get in just before it shuts down to travel back in time.

But then come the curves, which the video above tries to overcome with diagrams and a crisp explanation. Because, in the world of ‘Primer’, if you travel to the past and change something that prevents your past self from getting into the machine, then the symmetry is broken and there is a doubling. Not to mention that the complexity increases exponentially when you travel in time with another machine, to mount it in the past and operate it behind the back of other versions of yourself.

Offer: charge your iPhone, your iPad and your MacBook at the same time with this powerful 120W charger

‘Primer’ may at first seem the same as other time travel movies, but boy do curves come later …

Once the symmetry is broken, with other versions of the characters with their own agenda, it becomes impossible for the original protagonists to even conceive what is happening. And while, his other versions, more aware but just as delusional of what may be happening at his expense, have two options: disengage or try to control the future.

From all this we draw a valuable lesson: if we had the ability to travel in time, unless we kept our interaction ridiculously low, a small change could muddy our perception of what is happening by bringing unexpected consequences.

The smartwatches that were ahead of their time: how were the Casios that already had video games in the 80s 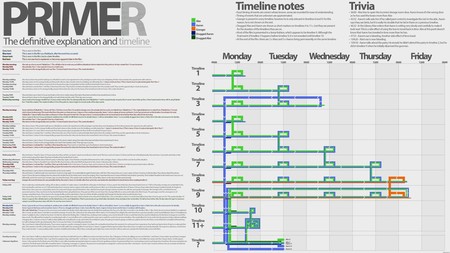 No machine, no trip

Another of the successes of ‘Primer’ in its realistic approach is that, according to some theories about time travel, you could not travel to a point before the first temporary machine was turned on.

That is, no traveling to millions of years in the past (as in Ray Bradbury’s ‘The Sound of Thunder’) or a millennium to the future (as ‘The Time Machine’ by HG Wells). The machine is not only the locomotive, but also the rails and without it there is no journey, something that we also saw in ‘Los cronocrmenes’ by Nacho Vigalondo.

The reasons I have given you before are more than enough to make ‘Primer’ a well-deserved cult film and one of the best of its kind, but I think its main attraction is its characters.

Abe and Aaron don’t face the end of the world. They are not trying to avoid a catastrophe, perhaps an incident at a party, but nothing spectacular or very tragic. And yet the consequences are catastrophic on an emotional level.

Because they are not satisfied with getting some money playing short-term on the stock market, but they want to explore physical and moral limits. And things are hidden, manipulated, observed. They make plans within plans, they end up with various versions of themselves roaming the world without being able to claim what their life was. And worse still, their friendship is broken.

They manage to measure the shortest unit of time ever recorded: 247 zeptoseconds

In the end, ‘Primer’ is more related to ‘The social network’ than to ‘Back to the future’ because it shows that we are all an invention away from becoming a bad person for others. And what, on the way, We must not ask ourselves if we did the right thing to discover the fire, but if we can bear the sight of a fire.

Microsoft Surface Pro 8 and Surface Laptop 4: the first leaked photos seem to indicate that the continuity in design will continue